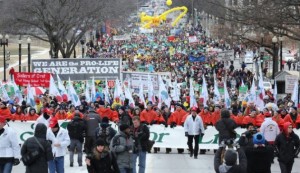 Flooding out of the Verizon Center and many other venues across the nation’s capital hoards of little bunnies marched through the streets protesting against government plans to cull the rabbit population through abortion.

For some years now Catholics and other Christians continue to “breed like rabbits” thus threatening the culture of death and the US government funded death programs.

A representative of government funded death squads called PE – Planned Extermination said, “It’s disgusting, thousands and thousands of revolting baby rabbits appeared out of nowhere. They are singing and chanting and the most disgusting thing is that they are all happy bunnies who plan to go home and make more and more of the horrible creatures!”

An  attractive young rabbit named Harvey said, “We’re not just campaigning against the killing of baby rabbits. We’re marching to show how wonderful rabbits really are!”

Rabbits came from all over the country to flood Washington and send a message to lawmakers: “We’re Rabbits. We Breed. Get Used to It”

A group of rabbits travelled for two days from Watership Down, Texas carrying signs saying, “Hazel Lives!” and “Fiver for Life!”

Restaurants in the Beltway have run out of salad, with carrot salad being one of the first supplies to be exhausted.

Park officials have commented that the grass on the Mall has been devastated and will take years to grow back. “Man! All those rabbits sure were hungry!”