I’d Rather Be at March for Life

I’d Rather Be at March for Life 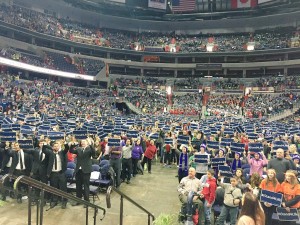 The Verizon Center Youth Mass Before This Year’s MFL

This year I am missing the March for Life.

I have attended almost every year since moving back to the United States in 2006, but this year I felt I needed to attend our diocesan priest’s convocation.

With the greatest of respect for my bishop and fellow priests. I’d rather be at March for Life!

Here’s what’s great about the March for Life.

First of all, it is not simply an anti-abortion protest. Sure we’re protesting the crime of abortion, but it’s called March for Life because we’re only against abortion because we’re in favor of Life, and that zeal and lust for life simply explodes at the March for Life.

When you attend the Mass at the Basilica the night before a great Catholic church is filled to overflowing with life. Young people and old people, Cardinals, Archbishops, Sisters and Brothers, Priests and people all gathered together in worship. It is truly amazing and moving and full of life. This is where the Catholic pro-life stance shows itself to be positive, powerful and overwhelmingly good.

When you attend the youth Mass at the Verizon center you’re with 25,000 people–mostly young Catholics from around the country. The place is bursting with all the life, life, life of children and young people. What joy they have! What happiness and laughter fills the place! It is infectious. It is good. It is graced.

Then as you spill out into the streets of the capital and converge on the Mall your witness is joined with thousands of others. They were meeting in every large meeting space in the capital. There isn’t enough room in the city for all the buses. Every hotel room is full. Humanity is there and humanity is alive and this is life.

What I love about March for Life is that sense of purpose and joy. This is not an angry protest. In fact it is not a protest at all. It is a positive statement that life is good, that people are good, that children are a blessing. That a child is something to be cherished and welcomed not despised and killed.

This is why one day abortion will end in America–not because of angry protests and ambitious social programs, but simply because Light overcomes the darkness. Heat overcomes the cold and Life overcomes Death.

This is best illustrated by the simple fact that those who believe in life have babies. They have children. They have new life. The future belongs to them.

The logic is inescapable:

Any ideology based on destruction will be destroyed.

Any ideology based on killing babies will not have children.

Any ideology without children is without a future.

Any ideology based on a lie will perish for lack of truth.

Any ideology based on force will have that force returned to it.

Any ideology based on death will die.