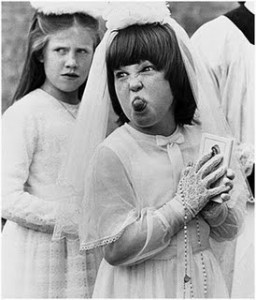 What do you say when presented with the bad example of bad Catholics? My latest blog post for National Catholic Register thinks about it.

Father,” said the middle aged man,  “When I was ten years old I was a faithful altar server and I turned up one day to serve wearing sneakers and the priest told me I couldn’t serve because I was wearing the wrong shoes.” Then with an air of indignant self righteousness he declared, “And I’ve never been back to a Catholic church since.”
Well, OK. But maybe, just maybe that was an excuse for not going to Mass?
One of the most common conversations I have as a Catholic priest is with people who have left the faith because of a bad example. Some of the stories are excuses for the person’s own hypocrisy, but other stories are genuine and the tales they tell of awful Catholics are heart-numbing.
There are plenty of people out there who want to dismiss the Catholic faith because of bad Catholics. “How can you follow a faith” they wail, “which has suppressed women, tortured and raped little boys and killed millions of people?”
Every Catholic has to admit that there are bad Catholics. Really bad Catholics. Vile, evil, wicked and depraved people who are Catholics.
However, since when do we judge any group or nation or religion only by their worst examples and by only by their followers and not by their beliefs?