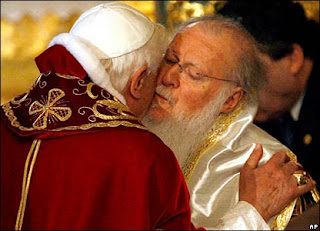 There has been some exciting progress forward in the quest for unity between the Catholic and Orthodoxy Churches. The Shriners at Holy Whapping have the story.

What interests me about this is the shriners paragraph on authority. The major excitement about this story is that the Eastern Orthodox have agreed that in the early church there was a sense of universal unity within the church, and that the Bishop of Rome had, at least, some sort of primacy. Of course details need to be worked out, but this recognition means that there is an agreed foundation upon which to discuss what the primacy meant in the first century and what it ought to mean, and how it ought to be lived out in the twenty-first century.

All ecumenical agreements impact the whole of Christendom, and all independent and schismatic actions affect the whole body of Christ. This agreement should affect Protestant Christians too who are interested in the affairs of the whole Body of Christ. Those who believe the true church is merely ‘invisible’ may have reason to re-consider if the two most ancient branches of the Church believe the early church to have considered itself to have a visible manifestation, and those who dispute both apostolic succession and any idea of the primacy of the Bishop of Rome may need to look at the matter again as both the EO and the Catholics have agreed on this basic understanding.