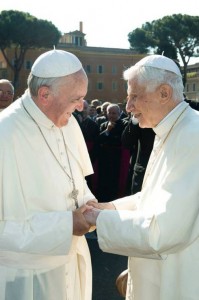 Elizabeth Scalia is very good here in her analysis of Pope Francis. She says Benedict is an anchor to Francis.

The two pope complement one another.

And ​now, Benedict is very much an anchor for Francis — who would not even be sitting as Peter, had Benedict not read the times and realized that no one was listening anymore; that something almost unprecedented was needed to change the narrative and shake the assumptions of the world. I am still unpacking the lessons of trust and discernment that Benedict modeled for us when he threw the entire church — and by extension the whole world — into the path of the Holy Spirit.

Francis, by his own words and actions, has captivated the imagination of the world, and if he seems flightly or undisciplined to some, it is a limited flightiness. The anchor of Benedict has literally grounded Francis to realities that must be confronted.