Do Christians Believe in Talking Snakes?

Do Christians Believe in Talking Snakes? 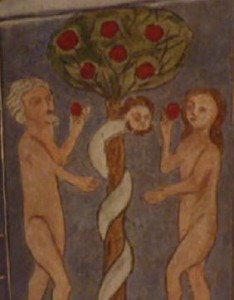 You know how the story goes: in the Garden of Eden Adam and Eve have a conversation with the serpent.

Does this mean Christians believe in talking snakes? That’s the charge from certain atheists.

I think this rather puerile remark comes from the fact that most of the atheists in question have probably experienced a few years of Sunday School at a fundamentalist church, or perhaps their grandpa once read them a Bible story book or maybe they went to Vacation Bible School once when they were eight years old.

This has been the extent of their religious education and so they concluded that to be a Christian you have to believe in talking snakes.

This is the intellectual equivalent of someone watching one episode of Bewitched and concluding that all American housewives are able to twitch their nose and make Uncle Arthur disappear.

But let’s take it seriously. Why are there clearly an awful lot of well educated, pretty smart people if to be a Christian you have to believe in talking snakes?

Because the story in Genesis with the talking snake has to be interpreted. This is a human skill we call “literary criticism” or “learning how to read and think.”

So what do we do with the talking serpent in Genesis?

First of all we accept that the story is just that: a story. Christians who have thought it through realize that this is not really the sort of story that we need to take literally. It was never intended to be read as a historical account of events that took place in a particular garden six thousand years ago somewhere near Iran. It is a story about the beginnings of guilt and evil in the world. This doesn’t mean that the story was totally made up. Indeed, Catholics teach that there was a historical “Adam” and “Eve” who did make a wrong choice. We are not insistent however that the story as it is recorded is word for word literally true. We allow that it may be a legendary story–that the events are rooted in history, but that over time the details were lost and the meaning of the story became more important than the history.

This is not being tricky or evasive. It is recognizing that the stories at the beginning of Genesis are very ancient and that ancient people told stories and recorded their history in a very different way than we do. To read stories that are thousands of years old one has to try to get into the mindset of the people to whom the stories belong and from whom they originated. We do this all the time with other forms of literature. If we read Grimm’s fairy tales we imagine the world of eighteenth and nineteenth century Europe. Same with any historic document.

There are other things to consider as well if we are to understand religious literature. Religious literature is always about meaning more than facts. Once we accept that this is not a newspaper report of particular events, but a reflection on the meaning of real events we’ll start to understand what’s going on.  Continue Reading