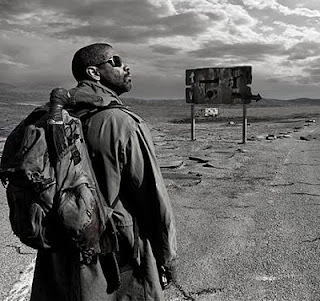 Eli is wandering through post apocalyptic America with a mission to deliver a mysterious book to ‘the West.’ As he wanders through the lawless lands he has to battle bad guys who run riot raping and pillaging. He encounters the ruler of a small town who will do anything to get the book he carries. Then there is a trick ending and the good guy wins.

This is an intriguing film. The direction and visuals are pretty cool. All done in a stark, sepia toned style with vast landscapes to emphasize the barren solitude of the hero. The spectacular and stark Western landscapes are the clue that this is really just an old fashioned Western. It is much like an early Clint Eastwood Western. The bad guys ride motorcycles instead of horses, but you still have the stock characters: the mistreated woman who needs a hero, the opulent, corrupt baron of the small town who surrounds himself with cowardly heavies, the kindly, but cowardly local shop owner. There’s a saloon, a shoot out and a prostitute with a heart of gold. The tough gun slinging homesteaders named George and Martha. So what you have is a re-cycled Western really.

Remember those Clint Eastwood Westerns where he’s an avenging angel or even a circuit riding mysterious preacher? The Denzel Washington character echoes all of those too, only he doesn’t smoke little cigars and squint. He listens to Al Green on an iPod and squints. The religious aspect is present too because it turns out that our hero is carrying a King James Bible. It’s the last one in the world, and the most precious artifact possible.

This is where the movie gets ‘iffy’. I couldn’t help drawing the conclusion that the film was trying really hard not to be preachy, and if a story is trying really hard not to be preachy, guess what? It’s preachy. Any film that is ‘theme led’ is preachy, and it seemed to me that this was really all about the necessity and the power of the Word of God and that without the Word of God society would descend into anarchy, violence, chaos and destruction.

I agree with the message, and I’m glad someone tried to package it up in an agreeable film, but even with a writer trying to downplay the message and wrap it up in a cool movie with lots of violence it was still heavy-handed, cliched and predictable. That’s not to say that it’s a poor movie. I actually think it was pretty good. 7 out of 10.

But then, maybe I’m just being a grump. See the movie for yourself and see what you think.