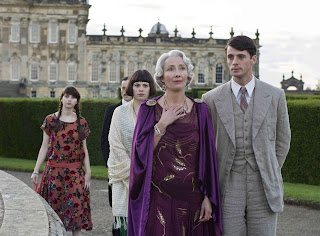 The 2008 movie version of Brideshead Re-Visited has much of the charm that Evelyn Waugh’s story makes so much of. Oxford in all her golden glory is there in it’s seductive ripe-ness. Yorkshire’s Castle Howard once more provides an unbelievably opulent setting. Venice ripples and sparkles with Tintoretto-ish delight. Morocco is sleazy and exotic. All is as elegant and decadent and as English and eccentric as you could wish for.

But this is a fairy tale England, and the film maker has given us a fairy tale in its worst sense rather than its best. Underneath the surface of Waugh’s novel (and captured faithfully by the famous TV version) there is real depth and complexity and reality to the characters. The film has none of this. Lady Marchmain is the wicked mother figure. Charles, Sebastian and Julia are babes in the wood–befuddled and lost in the wicked dark forest of looming adulthood, morality and serious religion. Bridey is the dull faithful prince, and Cordelia is the court jester.

So top marks for elegant locations, pretty costumes, but the acting is labored and shallow. We don’t see any reason for Lady Marchmain’s cruelty or Bridey’s buffoonery or Charles’ atheism. Some would say the problem is that they have tried to cram a very complex novel into a two hour movie, and that is certainly part of the problem. When you adapt a novel as big and important as this minor characters must fade out and subplots must be reduced and characters often become two dimensional.

However in this case, I think the problem is more significant. The writers and director either don’t understand Catholicism or (more likely) they have a superficial understanding and are totally unsympathetic. For example, in the novel Charles is presented as an agnostic. In the film he firmly claims the part of atheist and sticks to it. The Catholic characters are shown to be riddled with guilt. Their faith has no other dimension. Lady Marchmain is not the well meaning and simple (but sanctimonious) soul she is portrayed in the book and TV series. Instead she is a kind of cruel Mother Superior bashing her family with a harsh form of Catholic guilt. Not only do the film makers misrepresent the outward forms of Catholicism, but worst of all, they do not understand the really deep parts of Waugh’s intention.

The motor for Waugh’s whole story is the mysterious working of grace in the lives of the characters. The reason Brideshead Revisited is so fascinating as a novel is that we see God’s grace working its merciful way out through the faults and sinfulness of the Flyte clan. This works in the novel as an invisible and very subtle and powerful thread running through the whole tale. It is something, I would argue, which remains invisible to the unbeliever who reads the work. They simply don’t get it.

So it would seem in this film version. We never really see the providential resolution of grace in any of the characters’ lives. We don’t see the redemptive quality of Sebastian’s final suffering. We don’t see the simple depth and self sacrifice played out in Cordelia’s life. We don’t see the dignified denouement in Julia’s final decision to give up Charles. We don’t see the justice of Bridey losing Brideshead and Julia getting it. We don’t see Lord Marchmain’s final reconciliation as anything other than a superstitious moment and most of all we don’t see Charles’ final conversion. The film ends with him going into the Brideshead chapel and deciding to allow an almost flickering out candle to continue burning. Was that hope? Was that an indication of his own benevolent tolerance of the faith, or simply a resigned permission to allow faded old Catholicism to flicker out, gutter and die?

It was a good idea to do a film version. It’s a shame that the film virtually reverses Waugh’s intention.