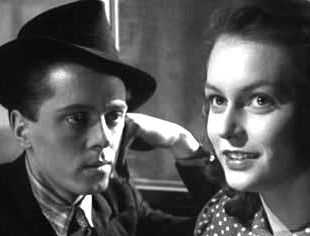 I’m re-reading Graham Greene’s novel Brighton Rock as research for an article for Joseph Pearce in StAR magazine. As usual, Greene explores the dark corners of the human heart in a thought provoking and disturbing manner. It’s like he’s poking the bottom of a clear and beautiful forest pond in order to stir up all the muck and muddy the water. On purpose.

Pinkie is a seventeen year old gangster in the 1930s British sea side town of Brighton. He’s a virgin. He doesn’t drink or smoke or gamble. But he’s also a murderer and a Catholic. Pinkie is a portrait in pure evil, and he’s being tracked down by a cheerful, bosomy worldly woman called Ida who drinks too much, fornicates happily in the seedy hotels (“It don’t do anybody no harm.”) gambles recklessly on the horses but she “Believes in justice” and “knows right from wrong.”

Here’s what’s got me puzzled: is there a difference between ‘right and wrong’ and ‘good and evil’? Pinkie’s innocent girlfriend Rose is also a Catholic, and it is as if she and Pinkie exist on a different plane from all the other characters. They don’t deal in questions of ‘right and wrong’. They deal in questions of ‘good and evil.’ They deal in the currency of damnation and salvation.

Ida is a conventionally moral person. She believes in law and order and rules and regulations, but she has no regard and not a flicker of understanding for the deeper morality of the divine law expressed in the Catholic faith. She’s an upright person. Maybe she would claim to be a Methodist or CofE (Church of Everybody) She’s self righteous in her way, and would never dream that (from Pinkie and Rose’s Catholic point of view) that she is just as much enmeshed in mortal sin as Pinkie is.

This is, perhaps, the simple genius of Graham Greene’s tortured stories: he shows characters operating according to this other, stranger set of rules–the rules of the Catholic faith–rules that do not replace the social ‘right and wrong’ that Ida understands–but rules that go above them and take simple human morality into a new dimension.

In this way Greene reveals something about being Catholic that is very hard to define–the sense that within Catholicism one is living the ordinary life that everyone else leads–but with a different perspective on everything–a stranger dimension–a dimension that has greater responsibilities, greater consequences and greater joys.