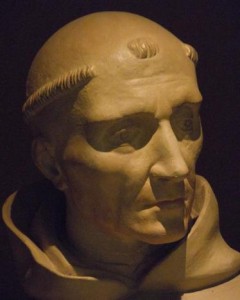 In attempting to collect a pantheon of bald headed saints we have come across the difficulty of the tonsure.

Was the saint really bald headed or was his head shaved?

A reader sent me this splendid photo of St Bruno–the founder of the Carthusian order, but we are uncertain if he is really bald or this is the effect of the monastic tonsure.

Same with the photos of soon to be canonized Bl Junipero Serra.

My conclusion is that it is a case of both-and. These are bald men who have also had the tonsure.

There were two types of tonsure for those who are interested. The Celtic monastic tradition called for the front half of the head to be shaved or sometimes just a bit from the top. 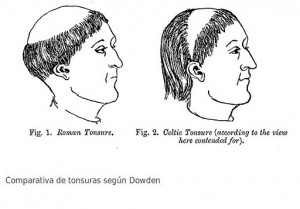 The Roman tonsure was the top crown of the head.

I believe further meditation on the tonsure is appropriate.

Why is it, for example that the shaved head is so typical as a tradition for monks?

After all, it is true not only within Catholicism, but Eastern religions also call for the shaved head.

It is clear to me that baldness is next to godliness. 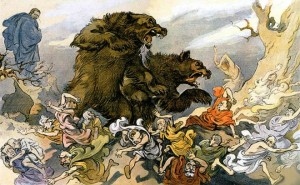 Remember the Old Testament story of Esau and Jacob? The wicked and lazy Esau was “a hairy man” (Gen 27:11) and we know that the prophet Elisha was bald.

Furthermore, he was mocked for it by some youths and the enraged prophet called a bear out to chase the scoundrels. (2 Kings 2:23-25)

Mocking bald prophets of the Lord?