Can a Catholic Vote for Donald Trump?

Can a Catholic Vote for Donald Trump? 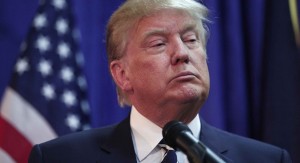 After writing an opinion piece about Catholics voting for Hillary Clinton, someone asked me to write a similar article about Donald Trump.

Can a Catholic vote for Donald Trump?

Let’s think it through. What I find curious about supporters of Donald Trump is that they are eager to tell everyone Hillary’s terrible past. We are told how she was incompetent, corrupt, dishonest and unreliable. We’re told of her husband’s infidelities and her cover up, her bullying, threats and general unpleasantness.

But somehow, when it comes to Donald Trump’s past we’re supposed to overlook all those character faults. His bragging about sexual promiscuity, his two failed marriages due to philandering, his draft dodging, his pro abortion past, his bankrupted businesses, sleazy contacts, casinos, strip joints and his general vulgarity and egomania are all supposed to be overlooked because “he’s not Hillary.”

Well, I don’t buy it. In my book they’re both as rotten as can be.

However, let’s see if we can find a silver lining in this very dark storm cloud. It is true that the Republican party platform (at least on the abortion issue) is somewhat better than the Democrats. It is also hopeful that Trump says he would appoint pro-life Supreme Court justices. It is also somewhat promising that Pence is his running mate.

In deciding about Trump therefore, one has to ask, judging by his track record, his character and his experience, is he likely to keep his promises? Is this a man you seriously believe to be an honest, ethical individual with personal and professional integrity? Do you feel that his behavior in the primary debates indicates a level of maturity, integrity, honesty and respect for others or did you see a bully in action?  As a Catholic you hear his statement that he is “pro life”. Do you have any confidence that he actually knows what that means and that he has any realistic plan to deal with the abortion problem?

So the question remains, can a Catholic vote for Donald Trump?

Because of his serious character faults, his lack of experience, his ignorance on the issues and his bullying personality I would answer “No.”

However, it is my own opinion that, considering his opponent’s strong support for abortion, that a Catholic just might, holding his nose and with great reservations, vote strategically against Hillary (especially if they live in a swing state). While they might not want to vote for Trump, they might vote for the Republican Party platform and Mr Pence and hope for the best.

The dismal news is that whatever happens (barring some extraordinary intervention) we are in for at least four years of a v. unpopular and dangerous President of the USA.