Can a Catholic Vote for Hillary Clinton?

Can a Catholic Vote for Hillary Clinton? 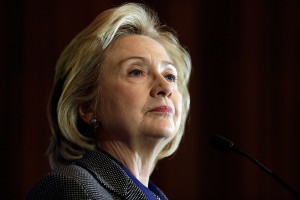 The question is very simple.

Can a faithful Catholic vote for Hillary Clinton?

But first, let’s get some things straight:

First, my opinion doesn’t really matter. How I vote as an individual is my business. How you vote is your business.

Second, don’t assume that a person’s criticism of one candidate means endorsement for their opponent. This election is about more than your presidential pick.

Third, don’t listen to me. Listen to our bishops. The document advising us on responsible voting is here. Read it. Part One. Part Two.

So here’s the simple question: Can a faithful Catholic vote for Hillary Clinton?

An example would be a nation that had death camps. The first pitfall would be for one to devote all one’s energies towards closing the death camps while ignoring pornography, warmongering, greed, homelessness, poverty and child abuse. The second pitfall would be to be concerned about all the issues and throw the death camps into the same basket, thus minimizing what is the greater evil.

So how do the bishops advise us?

Part Two of the document says:

The bishops do not tell Catholics how to vote; the responsibility to make political choices rests with each person and his or her properly formed conscience, aided by prudence. This exercise of conscience begins with always opposing policies that violate human life or weaken its protection.

and then they are quite clear:

Hillary Clinton’s support for abortion is total. She is on the record as supporting abortion up to birth.

This is not gossip or hearsay.

This page outlines the Democratic Party’s position on abortion. To summarize, Hillary Clinton fully backs federal funding for Planned Parenthood, wants to repeal the Hyde Amendment which bans US funding for abortions overseas, wants to clamp down on abortion protesters, and says being pro abortion is a “litmus test” for appointments to the Supreme Court. The Democratic Party’s platform can be read here.

Can a faithful Catholic vote Democrat in the coming election?

The answer is no.