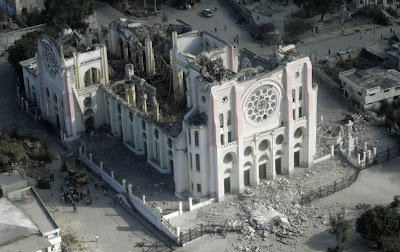 Pat Robertson hit the headlines after the Haiti earthquake speculating that the disaster was a punishment for Haiti’s voodoo practices. Rationalists were quick to pooh pooh such an idea, and anyone who believes in a merciful God should have trouble with the idea that the Almighty is up there doling out natural disasters to sinners. More questions arise than are answered with such a scenario. If God is punishing sinners, why does he let so many off the hook? If he is interested in visiting disaster on people, why an earthquake or tsunami which must kill an awful lot of innocent people as well as the wicked. No, the simplistic idea of God meting out such arbitrary ‘justice’ doesn’t make sense.

However, what if there were other forces in play which do alter the equation somewhat? We know that sin causes stress. You hurt me. I get angry with you. I feel stressed. You feel stressed. Maybe I hurt you back. Perhaps that starts a spiral of revenge and violence and negativity. So far so bad. We also observe that the negativity spreads to other people. Our hatred and violence and revenge and rage touches other people too. I talk to my friends and they take my side. You talk to your friends. They all get caught up in our spiral of rage. Before long we have a war going on. The same spiral of ugliness and sin and suffering applies to any kind of sin. Lust breeds lust. Rage breeds rage. Killing breeds killing. So it goes on.

It goes further: what if all this ugliness actually spirals out of control in a society? So we see that lust or rage or violence or revenge sometimes erupts in mass murder, genocide, massacres, rape and abuse. Sometimes a whole nation can be overtaken by sin. It’s like the whole tribe or the whole nation is infected with a terrible virus of evil or infested with an evil spirit. A mood takes over. A dark Lord reigns. The light goes out and inexplicably a whole nation drifts into the dark side.

Here’s the jump: what if these negativities and this darkness actually move across into the rest of the created order? Can the whole earth somehow pick up that virus of evil and take on the darkness and turmoil the way a whole society can? What if the natural order picks up the negativities and starts to boil over itself as if it is sharing society’s sickness? There seem to be hints in Christian theology that this is exactly what happens. The doctrine of original sin includes the idea that the whole natural order has also fallen into a broken condition and St Paul speaks of the whole of creation “groaning for redemption as a woman giving birth” (Rom.8:22) What if this interaction and identification of the whole created order with human choices is a constantly dynamic relationship and not just a once and done event?

So, while God isn’t up there throwing a dice to decide which wicked people get an earthquake today, it could be that there are mysterious links between human behavior and the behavior of the created order. Too much greed and rage and lust and violence might just boil over and manifest in natural disasters–as if the created order is reflecting our own corporate disharmony, violence and broken-ness, and this stress and corporate negativity erupts at the weak points–tectonic plates, dormant volcanoes or volatile weather cycles.

If this is so, then the opposite must also be true. A cycle begins with every act of sacrifice we make. A wheel turns with every prayer, every action of love and forgiveness and every little kindness matters. Everything in God’s good world is connected, and the good I do has eternal consequences. A science teacher once told me that every beam of light goes out into the dark universe and continues to travel forever. It’s the same with every action of love and goodness.

If this is so, then holiness doesn’t simply transform me. It transforms the world.