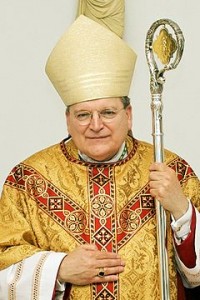 In this article for the National Catholic Register Cardinal Burke sets out exactly what the pope’s exhortation is, what it attempts to do and how it should be received.

He says clearly that those who set themselves up as critics of the Holy Father and the exhortation are wrong and are causing scandal. The behavior of the Catholic fundamentalists over the weekend has been scandalous. Some who believe themselves to be such good Catholics have used vile and obscene language about the Pope, trumpeted their prognostications of doom and gloom and in doing so have declared themselves not to be the best Catholics of all, but the worst.

Cardinal Burke is right to say they have caused scandal because their self righteous, ignorant and arrogant writings have caused others to stumble, lose faith in the church and to question the authority of the Holy Father and the church they say they love.

In a complete explanation of the intent of the exhortation and how it should be received Cardinal Burke writes,

The only key to the correct interpretation of Amoris Laetitia is the constant teaching of the Church and her discipline that safeguards and fosters this teaching. Pope Francis makes clear, from the beginning, that the post-synodal apostolic exhortation is not an act of the magisterium (No. 3). The very form of the document confirms the same. It is written as a reflection of the Holy Father on the work of the last two sessions of the Synod of Bishops. For instance, in Chapter Eight, which some wish to interpret as the proposal of a new discipline with obvious implications for the Church’s doctrine, Pope Francis, citing his post-synodal apostolic exhortation Evangelii Gaudium, declares:

I understand those who prefer a more rigorous pastoral care which leaves no room for confusion. But I sincerely believe that Jesus wants a Church attentive to the goodness which the Holy Spirit sows in the midst of human weakness, a Mother who, while clearly expressing her objective teaching, “always does what good she can, even if in the process, her shoes get soiled by the mud of the street” (No. 308).

In other words, the Holy Father is proposing what he personally believes is the will of Christ for His Church, but he does not intend to impose his point of view, nor to condemn those who insist on what he calls “a more rigorous pastoral care.” The personal, that is, non-magisterial, nature of the document is also evident in the fact that the references cited are principally the final report of the 2015 session of the Synod of Bishops, and the addresses and homilies of Pope Francis himself. There is no consistent effort to relate the text, in general, or these citations to the magisterium, the Fathers of the Church and other proven authors.

What is more, as noted above, a document which is the fruit of the Synod of Bishops must always be read in the light of the purpose of the Synod itself, namely, to safeguard and foster what the Church has always taught and practiced in accord with her teaching.

Finally, Cardinal Burke relates a personal experience, and he does so, as I did over the weekend in this post because a pastoral exhortation is ultimately not about doctrine but about pastoral practice. In other words it is not about theory primarily, but about real people in real situations in the church.

During the past two years, in which the Church has engaged in an intense discussion of marriage and the family, I have frequently recalled an experience from my childhood. I was raised on a family dairy farm in rural Wisconsin, the youngest of six children of good Catholic parents. Ten o’clock Sunday Mass at our parish church in the nearby town was clearly at the heart of our life of faith. At a certain point, I became aware of a couple, friends of my parents from a neighboring farm, who were always at Holy Mass but never received Holy Communion. When I asked my father why they never received Holy Communion, he explained to me that the husband was married to another woman and, therefore, could not receive the sacraments.

I recall vividly that my father explained to me the Church’s practice, in fidelity to her teaching, in a serene manner. The discipline obviously made sense to him, and it made sense to me. In fact, his explanation was a primary occasion for me to reflect on the nature of marriage as an indissoluble bond between husband and wife. At the same time, I must say that the parish priest always treated the couple involved with the greatest respect, even as they took part in parish life in a manner appropriate to the irregular state of their union. For my part, I always had the impression that, even though it must have been very difficult to be unable to receive the Sacraments, they were at peace in living according to the truth about their marital state.

Over more than 40 years of priestly life and ministry, during 21 of which I have served as a bishop, I have known numerous other couples in an irregular union for whom I or my brother priests have had pastoral care. Even though their suffering would be clear to any compassionate soul, I have seen ever more clearly over the years that the first sign of respect and love for them is to speak the truth to them with love. In that way, the Church’s teaching is not something which further wounds them but, in truth, frees them for the love of God and their neighbor.