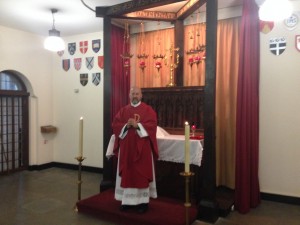 We arrived in London yesterday and went drove immediately to the Tower of  London where we were taken on an excellent tour. On Tower Hill we were shown the exact site where St Thomas More and St John Fisher were executed, then visiting the tower saw the Crown Jewels, the site of Anne Boleyn’s execution and found our way to the Salt Tower–the one room that is open to the public which was used to imprison Catholic priests.

I was very moved to find carved in the wall the name of Henry Walpole. Walpole witnessed the execution of St Edmund Campion and was splattered by his blood. Inspired by his courage Walpole went to train as a priest, returned to England, was captured and tortured in the Tower and finally hung, drawn and quartered…and there was his name carved in the wall of the room where he had languished. 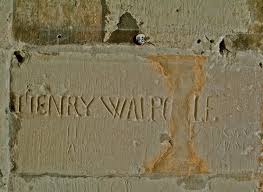 Today on the second day of our pilgrimage we started with a very moving Mass of the martyrs at Tyburn Convent. In the homily I said that the crown jewels were impressive and precious, but the blood of the martyrs was more precious. Seeing Henry Walpole’s name carved forever as a memorial was for more precious to me than big diamonds and rubies.

We viewed the many relics in the chapel, and I was especially impressed to see a fragment of the skull of St Cuthbert Mayne. Mayne is especially dear to us convert priests as he was an Anglican priest, converted to Rome  and became a Catholic priest.

After Mass we drove across town to take a tour of Westminster Abbey. I hadn’t been there as a tourist for many years so it was interesting to see Elizabeth buried with her sister Mary Tudor and across the way the tomb of Mary Queen of Scots. No on much liked the “state museum” aspect of Westminster Abbey, but we were glad to spot the new memorial tablet to C.S.Lewis in Poet’s Corner. Joseph was wondering why there’s no stone for Tolkien or Chesterton. We must do something about that!

We had a few minutes to stop in Westminster Cathedral. What a difference! That church is a house of prayer. Mass was being said at the high altar and the crowd was reverent an fervent. Long lines for confession–as it always seems to be at the Cathedral. 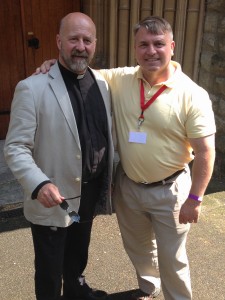 After a fish and chips lunch we continued our Catholic church crawl by visiting Farm Street Church and the Brompton Oratory. Beautiful new shrine to Bl. John Henry Newman and a funeral Mass was being said. Suddenly the choir burst into the Sanctus from Faure’s requiem. Great moment of beauty and peace!

From Brompton we went back across town to visit St Etheldreda’s, Ely Place. I told the stories of the eight martyrs portrayed there as statues: St John Houghton – the Carthusian prior who cried when his heart was being plucked out, “Sweet Jesus what will you do with my heart?” Anne Line, who was probably known by Shakespeare and ran a safe house for priests, Bl John Roche, who rowed a boat t0 help a priest escape and paid for it with his life, Margaret Ward-protector of priests, St Swithun Wells, tutor and faithful Catholic and more.

The whole day was exhausting and thrilling. The English martyrs are completely fascinating and a total inspiration.

I was feeling nostalgic for England a bit today. It was bright, slightly warm and clear. London was alive with busyness and activity, then in Brompton Oratory everyone started singing “Abide With Me”. I joined in with gusto and felt a deep loss. I miss all the good music in the Anglican tradition, and still feel sad and disenchanted at what has happened to the C of E.

Tomorrow we are headed for Canterbury to see the head of St Thomas More, say Mass at the Cathedral at the site of Thomas a Becket’s martyrdom and then back to London for another night.