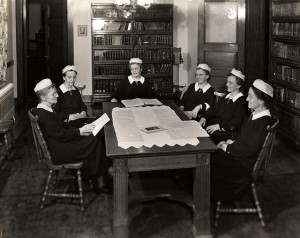 Over at CRUX I weigh in on the question raised by Archbishop Dubrocher that the Church ought to consider ordaining women to the diaconate.

Therefore, the evidence from the New Testament and the early Church could provide arguments for women being ordained as deaconesses. As the order of permanent deacon was re-established in modern times, the order of deaconess could also be rejuvenated. Although canon law does not presently permit it, the law could be changed. Theoretically, the Catholic Church could re-establish a distinct order of deaconess, and advocates would not be shy in pointing out the undoubted practical benefits from such a decision.

A full discussion, however, demands that we would have to question why this change was necessary.

An outspoken advocate for women’s ordination to the diaconate is Phyllis Zagano, and she takes the other side.

Go here to read both sides of the debate.

What Phyllis Zagano (and a fair few of the commenters) slides past is a distinction I made in my own column. Zagano argues for female deacons, but this would remain an impossibility since the diaconate is part of the united three fold ministry of Holy Orders. The priesthood is an extension of the episcopacy and the diaconate is an extension of the priesthood. This is why priests are ordained as deacons first.

The church could, theoretically, restore the primitive order of deaconess, but what this would need to be a newly re-established religious order quite separate from the diaconate. But what would be the point? There are already umpteen religious orders open to women only. They’re called religious sisters and nuns and are already a distinct religious order for women in the Catholic Church. If women want to serve the church in a regular, consecrated–non-clerical way then why do they not become sisters or nuns?

The reason can only be that the advocates of women in the diaconate see this as a first step to having women priests, and indeed, the example of the Anglican and Lutheran churches is that this is precisely what their agenda is.

On a side note, the picture is of Lutheran deaconesses and is provided by former Lutheran pastor, Deacon Richard Ballard.

Since the church has ruled against women priests, then it is also quite wrong to have women deacons, and to re-establish the ancient order of deaconesses in the church is totally un-ncecesssary and for those who are still pushing for Catholic women priests it is unkind because it is offering them something (ordination to the priesthood) which is impossible.

One commenter at CRUX makes the obvious point which must occur to all who follow these debates: if Catholics want women’s ordination why on earth don’t they join the Anglicans or Lutherans?