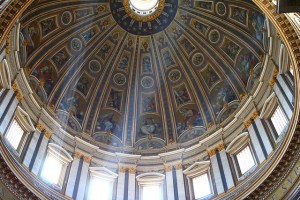 As the synod meets in Rome there is much talk about the Catholic Church changing.

The reason the Catholic Church is still here after 2,000 years is that she has not changed according to every fashion that comes along.

That’s why, although she has remained for 2,000 years she has also been persecuted for those 2,000 years.

The ideologues cherish the idea that that the Catholic Church might validate their ideologies and pull their bandwagon. This is because they know that the only global organization that transcends languages, tribes, nationalities, economics, politics and culture is the Catholic Church.

Think about it–the Catholic Church commands the loyalties of over a billion people worldwide and her influence is growing. Think of the crowds that turn out to see the Pope. There is nothing like this. It is a huge, huge human phenomenon and no political or economic or cultural movement can ever hope to even come close to matching it.

This is why ideologues both love and hate the Catholic Church–because she is above their petty schemes and plans. She has been around longer than them and she will be around after they are gone.

On the other hand, the Catholic Church changes where she needs to. Better to say she does not change, but she does adapt.