Catholicism, Sausages and the Roots of Religion

Catholicism, Sausages and the Roots of Religion 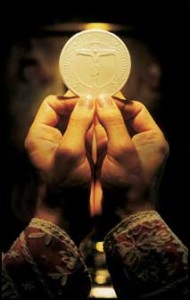 Celebrating daily Mass is a blessing because you can take more time to contemplate and ponder the mysteries before you.

On a large Sunday Mass I am too often concerned with all that is going on around me and making sure everything is going smoothly.

On Sunday night I had been reading Mircea Eliade’s history of religion. So many of the themes present within Christianity echoed through the myths and rituals of the ancient pagan world.

The atheist critics say, “You see? Christianity is merely paganism warmed up. All those ancient myths are simply swept up, re-hashed and mashed with added spices and forced into Christianity….kind of like making sausage.”

I could see their point as I was standing at the altar. I thought to myself. “This really is quite remarkable. Here we are in the modern age and I am standing here as a priest at an altar making a sacrifice. No other religion in the world still does this. Okay, maybe some primitive tribes still offer sacrifices. Maybe creepy witches do or a few scattered obscure sects, but nothing mainstream, and not in the modern world. But here I am, a suburban man with everything modern and I’m wearing robes, offering incense, lighting candles and making a sacrifice. This is either really very very cool or very very creepy.”

How little he understands.

Of course this is just where the Catholic needs to stand the whole argument on its head.

Paganism in all its forms wherever it existed was remarkably similar. This is what one gets out of Eliade’s work–that time and again in culture after culture they came up with the same essential myths and models of reality. The gods in one way or another were interacting with humanity for redemption, release, prosperity and peace. Sacrifices were made. Battles were fought. Heroes emerged. Enemies were vanquished. Souls were saved. Humanity survived the crisis.

Only in Catholicism is this still going on. Continue Reading