I am featuring links to some of my archived articles through the blog and will be spending some time improving those links over the next few weeks. 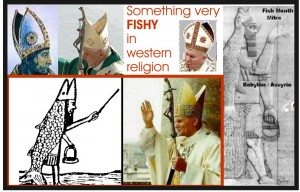 I hope the blog will soon be a resource with many more articles from various sources that I have written over the years.

Here’s a long apologetics article first published in Catholic Answers Magazine which is very important since so many of those who attack the Catholic faith–both Protestants and atheists–blame Catholicism for being pagan. It begins with the crazy conspiracy theory that Catholics worship the ancient fish god Dagon…

Did you know that Catholic bishops are actually high priests of Dagon, the ancient pagan deity of the Philistines? You see, the miter the bishop wears is a replica of the costumes worn by the priests of Dagon. That’s right, the priests of Dagon wore a head dress that looked like the head of a fish with an open mouth, and down their back they wore a long cape that looked like like the skin of a big fish. When you look at a Catholic bishop sideways you can see the open mouthed fish head and his cope looks just like that fish skin they wore! This proves that Catholicism is really just old fashioned devil worshipping paganism right? Wrong.