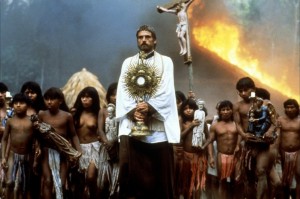 Carrying the Cross into the heart of Darkness

Now we will see the backlash.

Europeans will begin to scapegoat all Muslims. The hatred lying just beneath the surface will erupt. Mosques will be targeted and attacks on innocent Muslims will simmer then explode.

So the ancient, mindless cycle of victims, violence and vengeance will begin.

This is the way of the world from the beginning. This is the structure of violence from the day Cain killed his brother Abel.

This is the violence and vengeance at the heart of the human condition.

Who can avoid it and who can blame? You hear it on the playground….”But he hit me first!”

You hear it in the United Nations, “The conflict was started by X and retaliation was swift and just.”

It is so basic to the human condition that you might even say this is the dark oil which lubricates the whole silent planet of ours.

The mystery of the cycle of victims, vengeance and violence is that it is unavoidable. When attacked and injured by another who would not respond with frustrated rage and demand vengeance? Who would be so soft and spineless as to reject the pattern of violence and insist that vengeance is not the way? Not to attack back would seem to condone the violence and open the way to more. Not to punish the criminal is to excuse the criminal. Not to retaliate is to allow the evil to flourish.

So the cycle of victims, vengeance and violence turns and spirals on and on until it is out of control and the law of “eye for an eye and tooth for a tooth” leaves the whole world blind and toothless.

An insidious and poisonous part of the violence is that the wounded tribe or the injured individual seeks the guilty culprit on which to focus the lust for vengeance. A culprit must be found. The guilty must be punished. There must be retribution. There must be payment for the crime.

The lust for vengeance will attach to most anyone. It doesn’t really matter if they are guilty or not. Someone must be punished. The lust to return killing for killing must take place.

And so the scapegoating begins. A whole group of people will be blamed, then isolated, then vilified, then removed, then persecuted, then killed.

In Europe right now it could be all the Muslims. In Europe seventy five years ago it was the Jews. It could be the Catholics, the Native Americans, the blacks, the whites, the rich, the poor. The scapegoat could be any unusual individual or any outsider group.

All the evil is loaded onto the scapegoat. It is their fault. All of it. They are the evil ones. They must be destroyed… Continue Reading