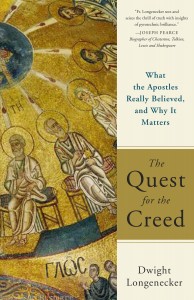 St Benedict says you should read a good book for Lent, and I agree.

The Quest for the Creed is twenty short chapters on the Apostle’s Creed. It is written in an upside down Chestertonian style. It’s free from churchy, boring stuffy language and is crammed with illustrations from popular culture, anecdotes and new ways of looking at old truths.

This book was first published as Adventures in Orthodoxy. Then it was picked up by Crossways and they published a new edition with new material for each chapter and a new foreword.

There is a picture of God in a painting in Ghent, Belgium. He is wearing a big crown, a red robe and he has a long beard and he is sitting on a throne. Sophisticated people and Protestants would object to this portrayal of God because it is so literal and physical. After all, we know that God does not sit on a throne in heaven wearing a crown and a red robe. After all, God is pure Spirit; like the jazz singer he “ain’t got nobody.”

But we have to picture God somehow because when we try to imagine a ‘pure Spirit’ all we can come up with is a bottle of vodka or rubbing alcohol. Therefore to picture God as the cosmic Father who sits on a throne and is the ruler of all is probably the best image we could come up with. Some will protest that he then becomes a fairy tale king, but why is everyone so down on fairytales? If you read the masterpiece of the splendidly named Bruno Bettleheim you will see that fairy tales connect humanity with the deep unconscious realm and that’s very interesting indeed. So when we imagine God to be the great cosmic Father King in a red robe and a big crown we’re not being superficial we’re being super deep.

Besides, we didn’t think up the image of the Cosmic Father King in the first place. It was given to us. It’s part of humanity. It’s written deep in the history of the human race. It was revealed to us like the sun is revealed in the morning and like the first whisperings of love are revealed to a fifteen year old boy. That’s what we call ‘revelation’ and it is something that echoes in the human heart just about everywhere. It is that revelation–that hint of something beyond and that glimpse of glory that the atheist ties so hard to deny. So here are some thoughts about atheists who do not believe God exists, and questions as to whether atheists actually exist…

I have a curious respect for atheists. There is something heroic about an outspoken atheist. He wears his denial of God on his sleeve with a certain panache. He challenges the deity as Cyrano de Bergerac duels with death. The atheist courageously contradict the instincts of the entire human race to declare the non-existence of God. Like a latter day Don Quixote, the atheist rides off to joust with the windmills of superstition, religion and the fairy tale deity. With touching absurdity, the crusading atheist overlooks the fact that he spends time and effort refuting something he does not believe exists. That is why I like atheists. The rebel in me always admires someone who paddles upstream, and should they attempt to scale a waterfall in their canoe my admiration for them increases. The campaigning atheist is like that. Despite all the evidence, despite the universal religious instinct of the human race, he acts on his solemn belief that there is nothing to solemnly believe in. Because of his passion I have a grudging respect for the militant atheist, but that is also why I don’t believe he is really an atheist. He believes too much and cares too much for truth to really be an atheist.

Is there really such a thing as an utterly authentic atheist? I think so. I have a dreadful feeling that there exists a sort of human sub-species who have lost their spiritual capacity completely. These authentic atheists do not profess belief in God, but neither do they profess disbelief in God. Instead they seem unaware of the concept altogether. They do not hate the church or say the Bible is a fairy tale. They do not spit out bigoted remarks that blame the Pope for the holocaust or missionaries for murder. They do not demolish the arguments for the existence of God, say the universe is random, or blame Billy Graham for being a simpleton. They do not attack religion; they are simply unaware that such a thing as religion exists. These are the authentic atheists. They plod through life eating, working, shopping, breeding and sleeping and God never seems to flit across their consciousness. Members of this sub-species may be sparkling sophisticates or ill-bred boors. They may be the decent and moral folks next door or they could be despicable murderers. In a frightful way it doesn’t matter. If they exist, perhaps they have bred and spread like the alien body snatchers, and exist in our midst like spiritual zombies– indistinguishable in the teeming mass of humanity except to those few who see them and tremble.

Go here to order your copy.