Christ and the Culture Clash

Christ and the Culture Clash 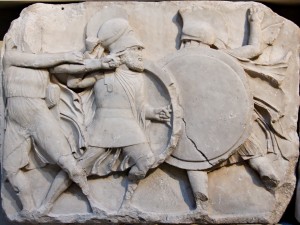 I gave a talk to our parish men’s group, the Fellowship of St Joseph on the relationship between Christ and culture yesterday.

It was loosely based on the classic text by Reformed theologian H Richard Niebuhr, Christ and Culture.

However, I always found Niebuhr’s analysis to be weak, subjective and vague. It also was not completely coherent with Catholic history.

Therefore I modified it somewhat to come up with a Catholic version which also connects with the stages of Catholic history.

1. Christ Clashing Against Culture – This is the situation typified by Jesus facing Pontius Pilate. The church and Jesus Christ clash with the way of the world. This is an apocalyptic faith–one that sees the world as belonging to the devil and the church and Christ are in battle against it. Jesus says, “My kingdom is not of this world” and “You cannot love God and Mammon.” The New Testament continues the thread with St Paul, St John and St James establishing “the world” and “the flesh” as opposed intrinsically to Christ and his church. This is almost a dualistic point of view, but one which remains potent in the Christian imagination.

2. Christ of Culture – At the conversion of the emperor Constantine Christianity suddenly moved from being the religion of a persecuted obscure sect to being the established religion of the Empire. The shift in the relationship between Christ and Culture was groundbreaking and radical. The foundation was laid for a truly Christian culture. The emperor and his mother led the way and before long the church was established, wealthy and participating not only in the religious culture, but influencing art, music, architecture, and literature. Christianity was still, however a substrata of pagan culture, and it’s influence was more one of bringing a Christian perspective on the existing pagan culture.

3. Christ is Culture – For a thousand years–roughly from 500 – 1500–institutional Christianity became one with the culture. As Roman civilization died out Christianity flourished. To be born in Europe was to be a Christian. The schools, hospitals, law courts, economics and politics were all either run by the established church or integrated completely with the church. The pope crowned the emperors. Bishops crowned kings and kings and emperors in return felt free to engage in church debates, appoint bishops and abbots and be involved in church politics. Christianity in this stage was inseparable from culture. Both were interdependent. This model continued in Catholic Europe beyond the struggles of the sixteenth century so that many of the immigrants to the US in the 1800s still considered themselves Catholic Christians simply because they were Irish or Polish, Italian or Portuguese.

4. Christ free from Culture – The American experiment was to break free from all established religion by establishing freedom of religion. Christianity was part of the worldview of the American founding fathers, but no particular church was established and integrated into the culture, the government, education, finance, law or politics. Christianity, it was assumed, would play a part as the conscience of the culture, but it would be independent. The state would not interfere in religion and religion would have no formal power in the state. The bond of the old established order was broken once and for all. The result of this was eventually to have not just a secular state, but one which would drift increasingly to become an atheist state. Continue Reading