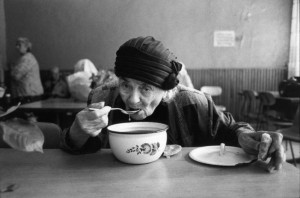 Are food pantries and soup kitchens always a good thing or are we inadvertently handing out deadly food and toxic soup?

My article for Aleteia this week focusses on the non productive way we do our charity work.

Those who run the soup kitchens, homeless shelters, food pantries and welfare programs are constantly faced with the dilemma of the prissy curate and the blunt Baptist. “Are we really helping people by simply giving them groceries, soup and a sandwich?” Don’t they have greater needs? By giving handouts aren’t we like the family members of an alcoholic who make excuses, turn a blind eye, bail him out and prop him up? Aren’t we encouraging dependency and enabling indigence? Aren’t the handouts humiliating?

Too much of our help is to help ourselves. We think we see a need then without any research or planning we barge in and throw our money and ourselves at “the poor”. Too often our charitable efforts are more about our need to boost our own self esteem by the wonderful things we are doing for the poor. We haven’t stopped to consider their real needs and how we might best solve them.

In effect, instead of curing poverty by attacking the root causes we are actually funding poverty and subsidizing it. We’re not the only ones. The government does the same thing. Big time with continual free handouts.

Atlanta author Robert D. Lupton asks the tough questions in his provocative book Toxic Charity: How Churches and Charities Hurt Those They Help, And How to Reverse It

Based on his forty years’ experience working in front line urban renewal projects, Lupton challenges American Christian assumptions about charitable work. He contends that handouts not only do not relieve poverty, but they encourage poverty. He uses Africa as a large scale example. Since 1964 the African continent has received well over $1 trillion in aid, yet country by country Africans are worse off than ever. The overall per capita income is less than it was in the 1970s with over half of Africans living on less than $1.00 a day.