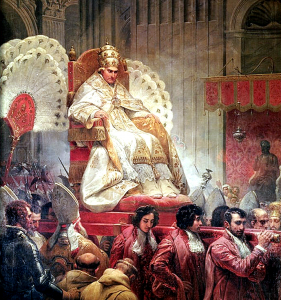 You can read about it here.

He makes good points and it is clear that he is addressing the situation in Latin America.

However, there is another side to the coin. It is certainly easy to criticize priests who dominate the church and get all high and mighty. We can all think of Father Fuhrer and Pastor Impossible, but I wonder how often they have assumed these roles because they felt forced into it.

In my opinion the laity carry a fair bit of the blame for clericalism. Here’s why:

Firstly, the laity too often assume an un necessarily adoring attitude to the priest. Yes, it is a wonderful thing to respect Father and his vocation, but when I see lay people groveling before the priest it is unhealthy. If they treat him as a divine oracle it will not be long before he believes himself to be a divine oracle.

If the lay people put him on a pedestal it takes a strong personality to resist the temptation to get rather used to the pedestal.

Thirdly, the priest might be the personality type who actually NEEDS his exterior priestly image. Maybe he  is insecure as a person. Maybe he has some secret sins of which he is ashamed and with which he is struggling. Maybe he is an introvert and needs the priestly image as a tool to relate to people. The more he relies on that false persona–the man in the collar and cassock–the more he will contribute to clericalism. When his people reinforce that image thing they themselves contribute to  clericalism.

Fifthly, the laity often want the priest to be their surrogate parent. They relapse into a kind of infantilism when it comes to their faith. In every other aspect of life they are responsible, mature adults, but when it comes to their Catholic faith they avoid responsibility and behave like little children always turning to the priest for everything they want. Their own immaturity in the faith contributes therefore to clericalism.

Don’t get me wrong, there are some priests who assume their clerical high horse, but most of the ones I work with aren’t like that. Likewise, most of the laypeople I work with aren’t falling in to the traps I outline here, but there are enough on both sides of the fence to observe that the issue of clericalism is, perhaps, not quite so cut and dried as some might imagine.