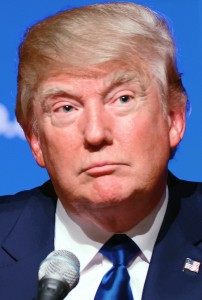 During the election cycle I was pretty outspoken in my dislike of both Donald Trump and Hillary Clinton. Since Trump’s election I’ve commented in (I hope) a balanced way here and here.

One of the most disturbing things about Trump’s presidency is not Trump himself, but the seeming inability we have to treat the situation with any objectivity and balance.

If I admit even a morsel of positive comment about what Trump has done I am howled down as a member of the Trump Triumphant Train. On the other hand, if I criticize Trump, his fans jump on me for being un-Patriotic, un-Christian and some try to shout me down and shut me up by saying, “You’re a priest. You shouldn’t talk politics.”

By the way, that old standby is invariably used when you are criticizing the person’s preferred party or candidate. As long as I’m blasting the other side they seem quite happy that a priest is talking politics…but that’s another matter.

What is worrying about this presidency is not just that the president is a polarizing figure. All presidents are polarizing. Politics is, by its nature, polarizing.

What is disturbing is the way we can see a Trump Cult emerging. I had a comment on FB last week from a woman who said about Trump, “Soon everyone will come to love him because they will see Christ in him.” Whaaat? Come on. Trump is not the Messiah just like Obama was not the Messiah.

Be glad for Trump’s win if that suits you. Rejoice in a Republican victory if you think that will make the world a better place. Argue your case if you like and be a loyal party member, but don’t join the Trump Cult. Support your candidate, but step back and be willing to criticize him too. Think it through. He’s only a man, a very flawed man, a ruthless billionaire and now the most powerful man in the world. If you are not intelligently critical, wary and cautious in your support, you should be.

The worrying thing about the Trump Cult is that his supporters in their fervor will be blind to his faults. So, for example, all of us who are pro life are glad that he has taken a pro life stance. But what has he actually done so far? He’s re-instated the Mexico City Policy which bans funding to NGOs that support abortion overseas. This is a good thing, but it is nothing too remarkable. Every Republican president since Reagan has done the same thing within the first few days of coming into office. Both Bush presidents did this, and then what pro life progress did we see from them? I’m glad Trump has done this, and its great that Conway and Pence spoke at March for Life, but don’t hold your breath. He’s appointed a pro life judge to the Supreme Court. OK. Good. Now let’s see if anything comes of it.

If you are a social conservative don’t imagine that Mr Playboy-cover Trump is your savior. Maybe he will do stuff that is pro family and pro life and pro religion. I hope he does, but don’t bank on it, and don’t make him your Messiah or you will be very disappointed.

If the Trump Cult is worrying, the anti-Trump cult is just as disturbing. These are the crowds who cannot imagine that Trump can do anything good at all. Ever. They have demonized Trump in the same un-thinking way that the Trump Cultists have divinized him. It is possible to concede that Trump the President might just have put together a good team of experienced and knowledgable people to run the White House. It is possible that he will bring his negotiating and management skills to the office and take some decisions that are good for the economy and the security of the country and the world. It is possible that beneath all the bravado and bluster he could be a pragmatic and prudent president.

But should one even concede this as a possibility one is characterized as a secret Trump admirer.

The point of this post is NOT to be pro Trump or anti-Trump, but to comment on the frightening inability we have to watch, wait and see and to judge the president and his rule based on what he actually does as  president–for good or for ill.

What interests me most of all is why so many of us have fallen into the trap of being either a member of the Love Trump Cult or a member of the Hate-Trump Cult. I think it is because we have lost our true faith and our first love.

Where there is no religion, politics becomes the religion.

Bottom line is–maybe we should all switch off the politics and turn to prayer.