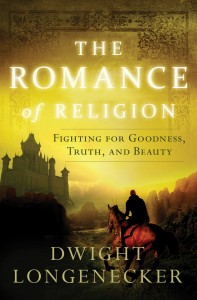 OK. Here’s another book suggestion for Lent. My book The Romance of Religion picks up on the idea that religion is a great adventure. It is not pious or puritanical or pusillanimous or pussyfooting around.

It is the stuff of all the great romances, the great adventure stories. It is full of great risks and great rewards.

In a world of useful things it might seem absurd to write a book in praise of romance. Who needs romance in a world that has been rationalized, economized, mechanized and computerized? Can romance survive in a world of profit margins and the bottom line? Isn’t romance (with its unfulfilled longing) a waste of time in a world where every desire can be gratified cheerfully and cheaply? Can the frail flower of romance live in the winter of a cold and cynical age? Can romance thrive where angels in full flight are shot down with facts, and fragile ideals are shattered by the hard stones of reality?

Let’s be optimistic. We should never be too convinced by the attitudes and emotions of the age in which we live. When poisonous ideas are universal, the desire for an antidote becomes all the more urgent. When certain ideas seem unassailable there is all the more reason to predict their downfall. Anything that has reached its peak must be on the brink of decline. Conversely, any process of thought that has reached its nadir can only be on the way up.

History shows that the pendulum swings back. Just when we thought a political system, a philosophy or an attitude was true and fixed for all time it is swept away by some sort of revolution. Those systems (like atheistic communism) that are built on false premises simply cannot stand. Like the house build on sand, it must fall when the tide comes in. Does our Western materialistic society seem thoroughly rationalistic, atheistic, despairing, and brutal? All the more reason to believe that the edifice is about to crumble and that everyone will soon be fascinated by faith and enchanted by the romance of religion.

It is a sad diagnosis, but the Western mind is seriously sick. Like the psychotic, we can’t think straight anymore—even if we want to. Like the psychotic there are only two options: Either we drift further into nihilism and continue to commit a kind of cultural and corporate suicide, or we get better. Put simply, we either turn into the dark void or turn away from the dark void, and to turn away from the dark void means we become romantics once more. What do I mean by becoming romantic? I mean that we realize we are members of a frail and finite little race, and as such we are all a little bit mad.

In other words, because we are limited in our knowledge, even the sanest of us are slightly insane. Our limitations are a kind of madness, and we only have two choices: to deny we are mad, and so descend into a dark spiral of total insanity, or accept we are mad and embark on a quest to regain our true and wholesome sanity.

An English friend delivered a backhand slam some time ago when she said with a snooty smile, ‘The Americans are so quaint! They still think it is possible to be heroes.’ I felt chastened, but I had to admit it: some of us (and not just the Americans) retain the romantic hero as our role model. We cheerfully concede that there is something absurd about the romantic. He is not a practical sort of soul. We know that had Romeo been a utilitarian he would have chosen sensible friends, gone to a good school, married the Montague next door and inherited the family business. The mouse Reepicheep would have stayed home to consolidate his collection of fine cheeses and Don Quixote would have entered a rest home to watch daytime TV.

But then, the romantic hero has always been a figure of fun. He is blamed not only for being romantic, but for being pugnacious. ‘You are a bombastic fool!’ his sensible critics cry. ‘You are an absurd poseur, an amateur and a fake’ they accuse. ‘You deal in generalities, broadsides and caricatures.’ Of course, the critics are right. The romantic hero strides through life with an air of superiority, but that is not because he thinks himself better than everyone else, but simply because he is looking in a different direction. His nose is in the air not because he looks down on others, but because he is looking up. He marches to a different drumbeat; not because he wants everyone else to march with him, but because he wants them to hear that a different drumbeat and a different way of marching exists.

Go here to order in time for Lent.