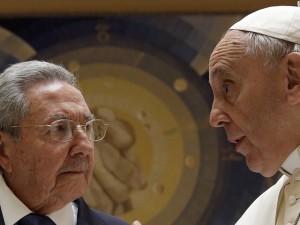 My opinion article at the National Catholic Register reflects on the fact that the Pope is visiting a country where, for fifty years the regime has oppressed the Catholic Church.

Pope Francis’ visit to Cuba and the United States puts the papacy in the middle of two historically anti-Catholic cultures. The communist regime in Cuba followed the atheist ideology of global communism and Catholics were persecuted. Despite the size and significance of the Catholic Church in America it should also be remembered that for most of her history America has also been hostile to the Catholic faith.

The physical contrasts between Cuba and her super-wealthy, super-powerful neighbor to the North could hardly be greater. Communism clashes with capitalism. Poverty clashes with wealth. Weakness clashes with power. But beneath these contradictions there is a greater similarity, because at the heart of America there is not only a historic distrust of the Catholic faith, but a new and growing threat of atheism.

This new atheism in America is not linked with a communist ideology, but with the materialistic ideology of consumerist relativism — what Pope Benedict XVI termed “the dictatorship of relativism.”