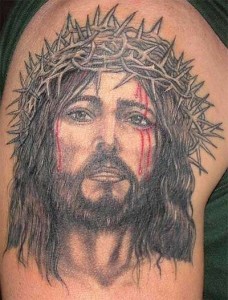 Are tattoos taboo? If so why?

Maybe because they lead to vanity and marring the image of God in which we are created.

My essay for Imaginative Conservative this week ponders the issue with reference to Flannery O’Connor’s story Parker’s Back.

O.E. Parker is one of Flannery O’Connor’s crazy misfits. A tough dropout who was captivated by the mystique of tattoo at the age of fourteen when he saw the tattooed man at the county fair. Having a tattoo made the poor idiot feel special, so whenever he was feeling down or lonely he got himself a new tattoo. After he joined the Navy, O.E. got a new tattoo in every port and finally he had no more space for a new tattoo except on his back.

Then O.E. Parker fell in love the best he could with Sarah Ruth, the scrawny daughter of traveling preacher. The problem is, pregnant Sarah Ruth is unimpressed with O.E.’s tattoos. She’s unimpressed because she sees through them. The tattoos are Parker’s mask and the swaggering mark of his false masculinity. Sara Ruth calls the tattoos the “vanity of vanities.” Her mockery of his tattoos drives him crazy. So to impress Sarah Ruth, O.E. spends a pile of money getting a beautiful tattoo he thinks will please her. It’s a haloed Christus Victor—as grand as a mosaic in a Byzantine temple.

But when Sarah Ruth sees the tattoo she shrieks out a condemnation of idolatry and beats poor Parker with a broom.

The essay is titled “Finding Ourselves in Flannery’s Freaks”