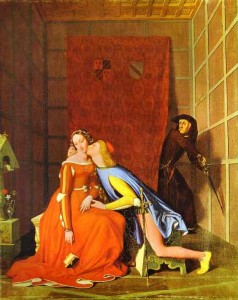 People seem so confused about morality.

I’m reading Dante’s Divine Comedy as Lenten reading and when he encounters Francesca and Paolo in the second circle of hell where the lustful are swept around by endless whirlwinds–because they were swept away by the whirlwind of lust.

Tony Esolen notes that it would have been easy for Dante to have made the disgustingly decadent wicked Queen Semiramis the main figure in this circle of hell, but instead he chose two very attractive people. Francesca had been tricked into political marriage with an older, crippled man. She feel in love with his younger, handsome brother and carried on an affair for ten years. They were discovered in bed by her husband and he killed them both.

This is a brilliant move by Dante because we can more easily sympathize with Francesca and we can hear ourselves so easily justifying her sin. “But she was tricked into a bad marriage! It wasn’t her fault! She can’t be blamed for simply following where love leads her! She and Paolo were in LOVE!! But they were such nice people! How could her husband be so cruel! No wonder she didn’t love him!”

Yes, yes. I understand, but moral judgements are not made only according to sentimental criteria. There is such a thing as right and wrong, and although subjective circumstances and intentions can be weighed when determining a person’s guilt, they do not negate the intrinsic good or evil of the act itself.

In making objective moral choices Catholics rely on both natural law and God’s revealed Divine Law. These laws are given in order that we might know and embrace the virtuous behaviors that bring us ultimate happiness and fulfillment as God’s created beings.

However, while the revealed law (both Natural and Divine) is the foundation of moral choices, I have been musing on other criteria for moral choices as well. There are some questions we might ask ourselves about any particular behavior which reveal it to be a moral choice or an immoral choice.

First, we can ask whether this choice is good not only for me, but for the other person. Stealing a loaf of bread may be good for me, but it is not good for the baker.

Second, we can ask what would happen if everyone made this same choice all the time. If everyone stole the bread they wanted every time they were hungry chaos would result.

Third, we can ask whether our choice is likely to further our health and well being. Not just physical health, but emotional, psychological, spiritual health as well.

Fourth, we can ask whether our choice is likely to further our health and well being in the long run. A short term sacrifice might pay long term dividends in the realm of morality.

What if we apply this to sexual morality–a question in our society which is terribly confused and in which even the idea that there might be “right choices” and “wrong choices” is anathema?

If we use these practical criteria (and you can probably think of more) to determine the morality of sexual choices it will soon become clear that a whole range of sexual behaviors that we are now expected to not only tolerate, but approve, will be shown to be immoral.

It is important to point out that immoral choices are not arbitrary decisions by religious leaders. They are tried and true and tested rules which society also has shown to bring about not only the individual’s best chance of happiness, but also to build up the common good in the long run.