Debate with Evangelical on The Immaculate Conception

Debate with Evangelical on The Immaculate Conception 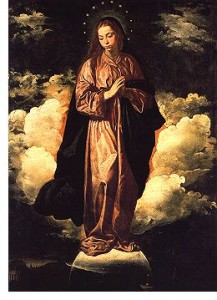 David Gustafson was a classmate of mind at Bob Jones University. We met again after many years and after a long running discussion via email about things Catholic and Protestant we wrote a book together called Mary-A Catholic Evangelical Debate.

The book is now out of print and I’m working to make it available again.

In the meantime, here is the chapter on the Immaculate Conception.

Dwight: I expect the Catholic doctrine that is most objectionable to Evangelicals is Mary’s Immaculate Conception.  However, since our aim is to approach our differences directly, I’ll state it right up front: Catholics believe that Mary was sinless from the moment of her conception through to the end of her earthly life.  Or, as the doctrine was officially defined:

the most Blessed Virgin Mary was, from the first moment of her conception, by the singular grace and privilege of almighty God and in view of the merits of Jesus Christ the Savior of the human race, preserved immune from all stain of original sin….

We admit that this doctrine is not stated explicitly in the Scriptures. Does that fact end the matter for Evangelicals?

David: Well, we’re a little more nuanced than that.  It’s true that our first question is always, “What does the Bible say?”  Cardinal Newman himself acknowledged that “No one can add to revelation.  That was given once for all.”

(Evidently he alludes to Jude 3–“the faith that was once for all entrusted to the saints”.)  If a supposed doctrine is not actually within the sacred “deposit” entrusted by the Apostles to the Church (1 Tim. 6:20; 2 Tim. 1:14, 2:2), then it is not an authentic part of the Christian Faith.

However, we don’t expect a Catholic to put on Sola Scriptura, Bible-only blinders.

It’s a long article, but I hope you enjoy it. If so, where with friends and family who might be non Catholics and who have questions about this doctrine.