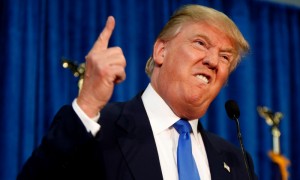 Why is Donald Trump so popular? Because we elect the leaders who are like us.

We get who we deserve.

Far from being a renegade, a wild card or an outsider, Donald Trump is the ultimate twenty first century American.

Think about it for a moment: Here’s a list of twelve things about Trump that hold up a mirror to America today.

I should stress here that what I am observing are general characteristics of our society. I don’t for a moment pretend that all individuals who support Donald Trump exhibit all these negativities–so if this doesn’t apply to you wonderful. However, if the shoe fits…

1. He’s a Spoiled Brat – Trump was born into a wealthy, East Coast,  privileged family, attended private schools, walked into a leadership position in his Daddy’s real estate company and inherited a pile of money from Pop. He avoided the Vietnam draft with four student deferrments and a dodgy “medical” deferment, but still claimed that marching around a square in a uniform at his private military academy prep school gave him “more military training” than most guys in the Army.

As such Trump perfectly reflects the affluent, privileged and entitled spoiled brats that Americans have become. No wonder he’s popular.

2. He’s Made a Pile of Dough on Casinos – Has anybody stopped to realize what scumbags casino owners and operators are? They make their loot by abusing the poor people, the addicted and the vulnerable. The old saying is, the only people who get away with cheating at the casinos are the casino owners. The whole sordid business of casinos is a reflection of the sick and decadent society America has become. So you want a fat cat casino owner for President? It would be apt because the whole country is addicted to gambling. What is the whole Wall Street con but a bunch of fat cat bankers and brokers playing the big game of chance in the Stock Market every day? Furthermore, most Americans gobble up their profits from stock market investments whenever and however they can. Finally, gambling is the sign of a sick and decadent society. Scumbag gangsters like Trump wouldn’t make it big on the casinos if Americans weren’t so drugged up on gambling to start with. But we’re just good with all that and like to refer to him as “a super successful businessman”.

3. He’s Comes Across as a Conman and a liar – He’s flip flopped on just about every issue in order to garner support and win votes. He says whatever he thinks his unthinking supporters want. He pushes their buttons and strokes their insecurities and plays them just like the con man used car salesman he is. His fake hair, fake teeth, fake face, fake tan says it all. He’s one big plastic surgery fake and American loves him because the rest of America is just as artificial and phony as he is.

4. He’s Unfaithful in Marriage – It’s hard to keep track of all Donald’s wives, mistresses and lovers. He married Czech model Ivanka in 1977, divorced because of his affairs with Marla Maples, dated Carla Bruni, married Marla Maples, divorced Marla, dated Kara, courted Princess Diana, married Melania–who it is rumored is a former porn star. And yet this cheesy lothario is hailed by right wing Christian Americans as the next wonderful president of the USA. Has everyone forgotten grandma’s old wisdom, “If a man is unfaithful in marriage why would you trust him in politics or business?” This is the sort of life that used to bring down American politicians, but Americans today overlook it. Why is that? Because their own lives are not far off the Donald’s. That’s why. They’re just as unfaithful in marriage as he is and just as lustful and disgusting.

5. He’s an egotistical demagogue – Listen to the man, all he does is talk about himself and how great he is. All he does is boast about the wonderful great things he is going to do to make America great. There is not substance to him. There are no policies. There is no qualification for high office. There is no experience in government. The man’s a joke. Why is he so popular? Because that’s what Americans are like. They love his egotistical grand standing because they are like that. Listen to conservative talk radio sometime. The hosts and people calling in are the same kind of ignorant braggarts that Trump is. That’s why they like him.