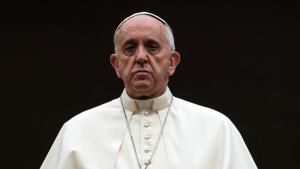 A new book called The Dictator Pope is making a splash.

I’m reminded of a handmade sign my mom had in the kitchen that just said, “Kwitcherbellakin”

I have to give full marks for a sensational headline. Dan Hitchens’ and editor at London’s Catholic Herald gives the book some airtime here.

Apparently the book rehearses all the same grumbles we have heard already: the Pope fires people with no discussion, there is a climate of fear in the Vatican, curial officials are sabotaging all attempts at financial reform, the “St Gallen Mafia” not only engineered Francis’ election, but Benedict was pressured to resign.

Well yes and maybe but then again maybe not. The book is authored anonymously and would seem to be a conflation of gossip and tittle tattle.

I’ve written on the subject over at my main blog here.

Are conservative Catholic distressed by Pope Francis? Yes, and they’re entitled to their grumbles, but what are they going to do? Start their own church?

C’mon folks. You don’t like the Pope? Look on the bright side. You weren’t supposed to make him into some sort of divine being anyway. He’s the successor of Peter–warts and all.