Did Archbishop Cupich Really Call for “Mercy for Nontraditional Families”?

Did Archbishop Cupich Really Call for “Mercy for Nontraditional Families”? 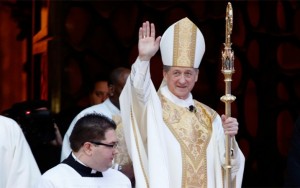 I wrote a hastily and ill  informed blog post about Archbishop Cupich yesterday in the midst of my travels back from Arizona.

Mischievous journalists with agendas will manipulate the news and the words of the famous to make them say what they want them to say. Or the again,  maybe they just hear what they want to hear.

Michael O’Loughlin at CRUX reports here on Archbishop Cupich’s homily at the Mass where he received the Archbishop’s pallium.

The headline reads, “Cupich calls for Mercy for Nontraditional Families.”

Given the hot button issues of the day it sounds like the Archbishop of Chicago is green lighting same sex marriage, polyamory, bi-sexual marriage, open marriages, surrogate pregnancies for gay couples, co habitation, remarriage after divorce and… (fill in the blank with whatever works for you).

The headline made Archbishop Cupich sound like a cheerleader for the whole progressive agenda.

Archbishop Cupich might well be the poster boy for progressive Catholics, but the problem is, the Archbishop never mentioned anything about “mercy for nontraditional families.”

You can read the text of his homily here.

The Archbishop explained the tradition of the pallium and the unity of his ministry with that of the Pope and said,

So, too, the pope guards the treasures of our faith so that nothing is lost, ever keeping before us the entire tradition, lest we end up absolutizing one particular era.

O’Loughlin reported these words as:

Cupich said bishops and other Catholics should avoid “absolutizing one particular era” by remembering the richness and diversity of their faith.

Is it just me, or does it seem that O’Loughlin made the Archbishop say precisely the opposite of what he actually said? Continue Reading