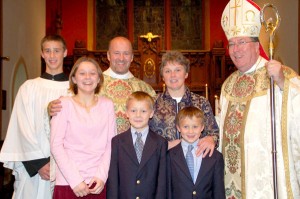 In many of the discussions about women’s ordination in the Catholic Church the question is linked to the idea of married priests.

Catholic progressives almost invariably link the two issues. “Priests should be allowed to marry and women should be ordained as priests.”

It’s understandable that people with a shallow grasp of their faith would link the two issues. After all, both of them are “groin issues” and people rarely think logically when that part of their anatomy is part of the equation.

When I was asked to write a book on married priests most of the agents, publishers, editors etc. also made the link. They assumed that because I was a married priest that I would first of all be in favor of allowing all priests to marry and that I would naturally be in favor of that other question: women’s ordination. One editor followed up by saying approvingly, “I guess once we get married priests and women priests we’ll soon have acceptance of same sex marriage.”

People need to understand that the question of women’s ordination and celibacy for priests are two completely unrelated matters. One is a question of discipline, the other of doctrine.

The question of women’s ordination was first discussed and then ruled out by Pope Paul VI’s encyclical Inter Insigniores. That document was a response in the 1970s to the Episcopal Church’s decision to ordain women priests. In the encyclical Pope Paul made it clear that this was a question not only of women’s ordination, but one of church authority. What does the church have authority to change and what does she not have authority to change?

Ordination is a sacrament and the seven sacraments were established by Jesus. Therefore the church does not have the authority to change what Jesus himself established. The illustration I use is that of using bread and wine for the Eucharist. If you were a missionary to a jungle tribe where they had never heard of bread and wine, and their staple food was manioc root bread and coconut beer you might think it possible to celebrate Mass with those elements. Not so. Even for a good cultural reason a Catholic priest cannot celebrate a valid Mass using anything other than wheat bread and wine from the grape. The church does not have the authority to change this fact.

Likewise, the church does not have the authority to change the matter of the sacrament of ordination. Even for a seemingly good historical and cultural reason the church cannot change it. Notice this phrase: the church cannot change it. This is not a matter of “we can do it if we want” it is a fact that we “cannot do it even if we want to.” The matter for the sacraments is a given. It is part of the revealed religion. We can’t change it anymore than we can decide that Mary wasn’t Jesus’ mother after all.

This question of authority to change was laid out clearly by Pope John Paul II in Ordinatio Sacerdotalis…affirming Pope Paul VI’s teaching. Cardinal Ratzinger wrote, ” This teaching requires definitive assent, since, founded on the written Word of God, and from the beginning constantly preserved and applied in the Tradition of the Church, it has been set forth infallibly by the ordinary and universal Magisterium” and Pope Francis confirmed this teaching saying the “door to women’s ordination is closed”. In Evangelii Gaudium he also said further discussion on the matter was pointless.

The question of married  men being ordained, however, is completely different in scope. Continue Reading