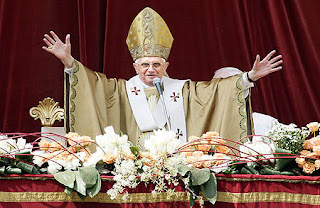 We Catholics are prone to point out the fissiparous nature of Protestantism, and observe that this is the result of the sixteenth century break from the unified authority structure of the Catholic Church. On this blog I have commented on the continuing disintegration of Anglican unity, and not a few times have lamented the fact that there are tens of thousands (and growing) of Protestant denominations. The much praised Charismatic movement is one of the most fissiparous of them all. The splits, divides, quarrels and schisms within Charismatic Christianity alone is enough to frustrate any attempt to understand, much less categorize and catalogue.
Critics will offer a reply in saying that Catholics are just as divided as Protestants. They point to the fact that we have kooky New Age politically correct Catholics. We have liberal, secular Catholics, and on the other end of the spectrum we have conservative Bible Catholics, traditionalists, Latin Mass afficionados and hard core sedevacantists who don’t even believe we have a valid Pope.
Cardinal Newman said, “A hundred difficulties do not make a doubt.” What he meant by this is that one may have difficulties understanding the faith, and profound difficulties accepting certain tenants of the faith, and even more profound difficulties living out the faith, but these difficulties do not comprise a doubt.” A doubt is something different. A doubt is negative. A doubt is a denial. A doubt is an attitude that promotes one’s own authority over the authority of the Church. A doubt says, “You’re wrong. I know best.”
The same distinction can be made between a disagreement and a division. A million disagreements do not make a division. Yes, there are Catholics with many different opinions. There are disobedient Catholics. There are rebel Catholics on both the liberal and conservative wings. There are Charismatic Catholics, trad Catholics, mainstream ordinary Catholics, lapsed Catholics and Catholics who are sinners, heretics and hypocrites. However, as long as they do not split off and start their own church they are still Catholics, and they are still part of the greater organic unity of the Catholic Church.
A disagreement is not a division. A division, like a doubt, is negative. It is proud. It is an attitude that asserts one’s own authority over that of the Church Christ founded. A division, like a doubt, says not only “I know best” but “I know so much better than everyone else that I’m going to start my own church or go to a church of my own choosing.”
Critics of the Catholic Church too often avoid the tough questions and too often skip the necessary distinctions. They think that for unity you need uniformity, and when they do not find uniformity within Catholicism they believe there is therefore no unity. They also think that there must be harmony in order to have unity, but neither harmony nor uniformity are necessary for unity.
The underlying, organic unity of the Catholic Church exists not despite the variety, but because of the variety. If you want uniformity and harmony join a sect. That’s one of the things they do well, because if you are not uniform and harmonious in a sect you’re out. On the other hand, if you want the rumbustious, hearty give and take of honest debate, and if you want to find true unity become a Catholic. There you will find unity within variety, and an overarching unity that transcends the differences of opinion and style–even if those differences and disagreements are bitter.
The unity of the Catholic Church exists because of the unified authority and focus of the ministry of the papacy. The papacy unites in a way that many people overlook. The papacy unites simply because it is there and because it claims the authority that it does. It does not enforce uniformity, but it does guarantee unity. The papacy unites all Catholics–even those who disagree bitterly with who the Pope is, what he does, and what he teaches. It unites even the dissidents because they too, (even in their dissent) acknowledge the authority of the Pope. They acknowledge that authority even as they kick against it.
The Rock of Peter is what all Catholics build on; even when we find that bedrock unyielding and intransigient, but without it we build our house on sand.
PatheosDwight2007-11-15T09:06:00-04:00November 15th, 2007|Categories: Patheos|55 Comments