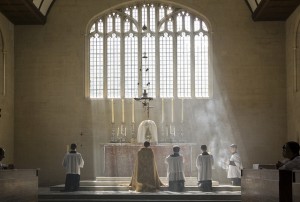 My latest blog post for National Catholic Register wonders if there is a connection between architecture, prayer and priests.

I know a young priest who was brought up as a Baptist. He went into a beautiful old Catholic Church during the liturgy. This was a classic neo-Gothic church with stained glass windows and a beautiful liturgy. He fell to his knees and said that he knew then and there that he not only needed to be a Catholic, but that he was called to be a Catholic priest. He’s not the only one. I know two other guys who eventually made the same decision for the same reason, and numerous other converts who were drawn by the beauty and reverence of worship including the reverence evoked by the beautiful church.

They saw that the Catholics were just about the only ones who took the time, trouble and expense to build a beautiful temple for God. The unknown architect of Glastonbury Abbey in England wrote, “I want to create a church so beautiful that it will move even the hardest heart to prayer.”  Beautiful buildings inspire the faithful and great buildings inspire us to do great things for God.

The question arises, if a beautiful church produces such enthusiasm and joy does it do even more than that? What if beautiful churches helped produce beautiful priests, and what if our current crop of dull and uninspiring churches have contributed to the lack of priests?