Why Don’t We Build Beautiful Churches?

Why Don’t We Build Beautiful Churches? 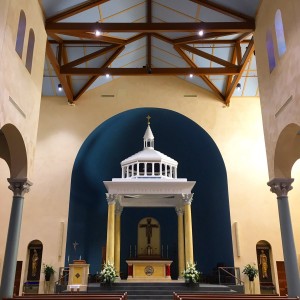 The new Our Lady of the Rosary Church in Greenville, SC

A reader sent me an email thanking me for the beautiful new Our Lady of the Rosary Church and asked why we don’t build more beautiful Catholic Churches.

First there is an ideological reason. Some modernists considered the second Vatican Council to be a kind of revolution in the church and that everything old had to go and everything new was necessarily a good thing. Therefore, for the last forty years there has been a stripping of the altars. Beautiful old churches were renovated. All the beautiful old stuff was pulled out and modern furniture and fittings were installed.

New churches were built in a style that was consciously modern in an attempt to “connect” with modern people, but also to convey a “new” understanding of the Mass as the “family meal”. This was driven by a naive, left wing egalitarianism which was the spirit of the age for the last forty years.

Consequently, ugly new churches were constructed that were more meeting halls than temples for God.

Secondly – these new, utilitarian structures were cheap. Americans were wealthier than ever before, but they built churches from cheap materials in a quick and cheap method. The utilitarian, economical method and materials fit in well enough with the egalitarian, utilitarian spirit of the age. It was “only a building” was the argument. Along with this went the idea that “we shouldn’t spend so much money on a  mere building when there are so many poor people.” But of course, the people who made that argument didn’t give their money to the poor either. They were using that as an excuse to keep their wallets closed.

Thirdly, modern Americans were not only ignorant of the great tradition of Catholic art and architecture, they were often willingly against that tradition. Modern architects and pastors felt obliged to ignore the tradition and even trample the tradition as something which was out of date and useless.

Fourthly – part of this misguided thinking never understood the foundational reasons for Catholic art and architecture in the first place because they had no understanding or use for something called Beauty. Modern architectural theory was purely utilitarian and beauty–where it existed was purely decorative. The modern purist architect would have no decoration at all if he had his way. It was superfluous.

As a result of all these trends we ended up with cheaply built concrete structures that everyone hated. They were ugly. Sometimes intentionally so. They were also very often badly designed. They were supposed to be cheap, efficient and effective, but too often the modern materials proved to be leaky, faulty and junky. More money was spent fixing the mistakes and trying to make good.

There are a few silver linings however. When new churches are being built today they are usually returning to the older styles and vocabulary of sacred architecture. In our diocese we are building new churches and all of them, for the most part, are within the sacred tradition. The look like churches. Some are very good. Others are ok. None are awful.

The same is happening in diocese around the South and Southwest.

Let us hope the tide is turning.