Nothing illustrates the two Americas better than last weekend’s Women’s March and this weekend’s March for Life. 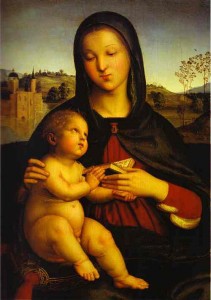 The Women’s March had unbelievable coverage by the mainstream media. It was as if the major media were unpaid, national and international supporters of a left wing agenda driven campaign. Unless something changes, on the other hand, we can expect the March for Life to be virtually ignored.

Half a million (mostly young) people will march and the world will look away.

The Women’s March featured foul mouthed celebrities. The March for Life will have no A-list celebrities. The Women’s March featured crude, aggressive and angry posters, signs and women dressed as genitalia. Apart from a few extreme anti abortion activists who display the gruesome reality of late term abortion, the posters, signs and banners at the March for Life will be low key, inspirational and positive.

As the greatest symbol of the two perspectives there are not only two marches and two Americas, but two Madonnas.

The aging pop star Madonna–a former Catholic who has made millions selling crude sex, occult religion and aggressive inyerface feminism, or the true Madonna–Our Lady– who gave her life to bring the world new life.

One an icon of anti-feminitniy, sterility and death.

The other, true femininity and Life itself.