Is Easter the Religion of the Goddess Ishtar?

Is Easter the Religion of the Goddess Ishtar? 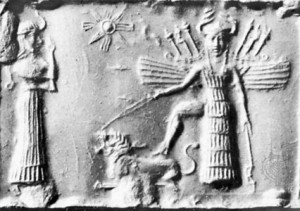 The weary old theory that Christianity is just paganism warmed up always circulates around this time of year.

Armchair atheists like to point out the similarity between the word “Easter” and the Near Eastern goddess “Ishtar”. The problem is, the myth of Ishtar had nothing to do with resurrection from the dead. She was the goddess of fertility, and went down into the underworld, but that’s about the extent of the similarity between the myth of Ishtar and the story of Jesus Christ. From Wikipedia, here is the story of Ishtar. See how similar it feels to the gospel account of Jesus’ death and resurrection:

One of the most famous myths[6] about Ishtar describes her descent to the underworld. In this myth, Ishtar approaches the gates of the underworld and demands that the gatekeeper open them:

If thou openest not the gate to let me enter,
I will break the door, I will wrench the lock,
I will smash the door-posts, I will force the doors.
I will bring up the dead to eat the living.
And the dead will outnumber the living.

The gatekeeper hurried to tell Ereshkigal, the Queen of the Underworld. Ereshkigal told the gatekeeper to let Ishtar enter, but “according to the ancient decree”.

The gatekeeper let Ishtar into the underworld, opening one gate at a time. At each gate, Ishtar had to shed one article of clothing. When she finally passed the seventh gate, she was naked. In a rage, Ishtar threw herself at Ereshkigal, but Ereshkigal ordered her servant Namtar to imprison Ishtar and unleash sixty diseases against her.

After Ishtar descended to the underworld, all sexual activity ceased on earth. The god Papsukal reported the situation to Ea, the king of the gods. Ea created an intersex being called Asu-shu-namir and sent them to Ereshkigal, telling them to invoke “the name of the great gods” against her and to ask for the bag containing the waters of life. Ereshkigal was enraged when she heard Asu-shu-namir’s demand, but she had to give them the water of life. Asu-shu-namir sprinkled Ishtar with this water, reviving her. Then, Ishtar passed back through the seven gates, getting one article of clothing back at each gate, and was fully clothed as she exited the last gate.

Most ludicrous is the supposition that because the word “Ishtar” sounds like “Easter” they must be linked.

In fact “Ishtar” is of Akkadian origin and Easter comes from Anglo Saxon. Thinking they are linked is kind of like saying “Elvis” must be linked to the resurrection because it is an anagram of “Lives”.

Putting that aside, cynics like to point to the pagan myths of dying and rising gods and they accuse the early Christians of hi-jacking those myths and laying a heavy layer of mythology over the simple Jesus story.

There were, of course, stories of dying and rising gods in the pagan world. Theologian Candida Moss summarizes them: Continue Reading