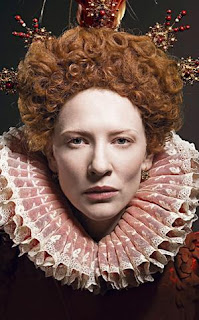 Phew! Where do you start with this mess of a movie? I am doing research for a film project at the moment, so am reading and watching all things Elizabethan. So I got this movie that I had hitherto avoided. Good stuff first: the costumes are beautiful, and Cate Blanchett is pulchritudinous.

Now the rest: Mary Tudor is portrayed as a sick and wicked witch in a dungeon. She’s ugly. She’s dark. She’s got bad teeth. She’s vengeful and nasty and neurotic. Think Geraldine McEwan’s over the top witch in that Kevin Costner Robin Hood nightmare. Mary Tudor may not have been the Little Flower, but surely her character deserved more sympathy than the pantomime villain portrayed here.

The religious controversy? Catholic bishops are all dressed in black with big black miters. They’re filmed from an ultra low angle making them seem like big, bad monsters. Gardner is a one-eyed, raging fanatic. The pope is seen fondling little boys before he signs the bull excommunicating Elizabeth. Then he commissions a black robed murderous priest to head off to England and assassinate Elizabeth. This guy is just one step removed from Dan Brown’s ludicrous albino assassin.

Meanwhile pretty Elizabeth is trying to solve the religious crisis herself. Like a petulant eighth grader she cries, “But we all believe in God don’t we?” Then she practices her speech in the mirror and wonders just what she will say to those awfully serious fellows in Parliament. “Let’s all be nice to one another! Why not? I’m only getting rid of the Pope for the sake of my people!” What no arguments of any substance on anything? Then she flirts with those awfully serious men, “I’m only a weak woman you know!” Suddenly they all fall for her arguments and hey presto we’ve got the Act of Uniformity!

Then there is the use of the interiors of Durham Cathedral as Elizabeth’s palace. Never mind that we all spotted it as Durham. While it looked splendid, the equivalent in the USA would be to use the interior of Grand Central Station for the Oval Office. Oh yes, Walsingham visits Mary of Guise in Scotland, jumps into the sack with her and kills her. She actually died of natural causes. The catalogue of inanities, historical idiocies, explicit and totally gratuitous violence, nudity and silliness is only compounded by a clunky script, bad acting (watch out for thicko English soccer star Eric Cantona) shallow characterization and simplistic history.

Not once do we get the idea that anyone in the movie or anyone associated with the movie has the slightest understanding of the religious and political complexities of the time. A comic book would have be more subtle and profound. To top it all, the movie ends with the ludicrous idea that Elizabeth slaps on the wig and white make up in order to look more like a statue of the Virgin Mary and because Catholics die for the Blessed Virgin if she makes herself look like a statue of Mary they will die for her instead.

If only we could see this film for what it is: a kind of Black Adder treatment of English history. Unfortunately, polls have shown that most people’s understanding of history is determined by the history flicks they watch. People swallow Kevin Costner’s bogus JFK. Hoi polloi  actually believe Dan Brown’s version of the Catholic Church and most folks think the ridiculous Elizabeth is some kind of documentary.

Ah well. At least the frocks were pretty.