Why Is Everyone So Easily Offended?

Why Is Everyone So Easily Offended? 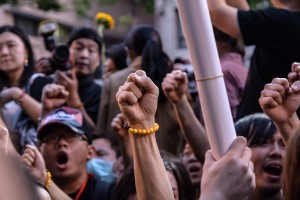 Maybe I’ve spent too much time on Facebook, but why is everybody so darned offended all the time?

Traditionalist Catholics are constantly getting on their high horse. Then its the feminist and homosexualists who are stomping off in high dudgeon. Next it is the Liberals or the Eastern Orthodox or the Lutherans or the college students or the environmentalists.

Everybody everywhere seems to be the hurt, offended victim.

Why is this? Its because of the dictatorship of relativism.

That’s why we have these college “safe spaces” and the fear of free speech–because other people’s truth is a threat and makes you feel bad.

This presents the next problem with the dictatorship of relativism. If there is no such thing as truth and there is only “your truth” then what is that “truth” based on? It can only be based on two things: sentimentality and ideology.

There is no logic, no reasoning, no discussion. There is nothing to based the truth on but raw emotion.

Of course people can’t live like that for long. Its too exhausting. One needs some sort of structure or belief system in order to survive. We must live in a world we believe to be rational.

So what the sad folks in our society do is they allow themselves to be drawn into some ideology or another. An ideology is a false religion. It provides a belief system for the person to live by and a kind of moral code too. It gives them something to live for.

This dynamic also leads people to feel threatened and offended because an ideology, by its very nature, is a campaign. It is a battle, and as such it intrinsically cause people to blame others for their problems.

Consider, for example, “the resistance” being led by none other than Her Majesty Hilary Clinton. Its a sentimental ideology rooted in relativism.

There now. I guess I’ve managed to offend almost everyone!

Seriously. The only answer to this is the One who said he is the Way, the Truth and the Life.

True allegiance to Christ the King puts everything else into perspective. Most of all it puts each one of us in perspective. With a touch of grace we see ourselves as we really are and we see our place in the wider plan and we realize that we do not need to be offended all the time.

We have confidence in Christ the Lord, and in him we can start to live with a bit of dignity, a sense of humor–a softer heart and a tougher skin.