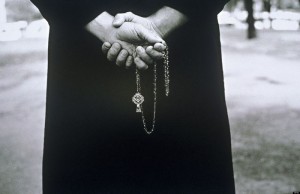 That little pill has changed everything.

The effect of birth control and a contraceptive culture has altered our world in ways we could never have expected.

Think for a moment about the effect contraception has had on the number of vocations to the priesthood and religious life.

First of all, if a family has ten kids it is more likely that they are going to be happy for a few of them to pursue the priesthood or religious life. Mothers will quite happily send a few off to the seminary or monastery. If she has ten she can spare a few.

But if the neat and tidy suburban career woman only has two she is going to treasure them that much more. The idea that one would become a priest would be a shocking idea, but there is another more subtle attitude shift beneath this.

When mother and father decided to limit their family to two children by artificial means they usually do so in order for the woman to go back to work. The silent statement is, “What is most important to this family is to have as much income as possible.” and “The career. The career is everything! It comes first. Children? Meh.”

This attitude is then transmitted to the children who also put career first. Will there be any vocations from a home like that? Probably not.

Think further of the effects of this revolution in family life on the question of vocations. Before the invention and acceptance of artificial contraception a young man considering the priesthood would look around and weigh up his option.

Let’s say he lived in Philadelphia in the 1950s. He came from an Italian American family. He sees his Dad, his uncles, his grandfather. They are working class. They sweat in dangerous jobs  to support their large families. They come home to a little house full of kids. Its a good life, but its a hard life.

The priest, on the other hand, doesn’t have his own wife and family, but he’s in Philadelphia. He gets sent to St Anthony of Padua parish. He’s surrounded by a big extended Italian family. He has status. He’s the priest. He gets an education. Maybe he travels to Rome. He lives in a big house with maybe three or four other priests. They have a  nice Italian mama who cooks and cleans and looks after them.

You pays your money and you makes your choice.

But think of the young man’s choice in today’s contraceptive culture. To be married and have a family doesn’t seem to require any sacrifices at all. Indeed, it seems like the passport to perfection. You get married. You eventually have two nice trophy children. Your wife continues her education and career. You’re both earning enough money to have everything. No sorrows. No sacrifice.

Of course I know it doesn’t always pan out that way, but that is what seems to be on offer.

On the other hand, for a young man to be a priest? He’s faced with a life of loneliness–stuck in Rectory by himself with onerous duties and little reward.

Again–I know it is not really like this, but this is what it may very well appear to be.

What’s to be done?

I happen to feel optimistic about the problem because I think the pendulum is going to swing back. I think an increasing number of young people are going to reject the contraceptive culture and choose a life giving alternative, and with that will be an increasing number of young men and women who choose a religious vocation, and they’ll be choosing for all the right reasons.

Why do I think this? Because a lie cannot sustain itself. All that is false eventually implodes. It can’t last.

On the other hand, all that is beautiful, good and true will always be attractive. Like fresh shoots on a tree that has been felled, it will spring back.