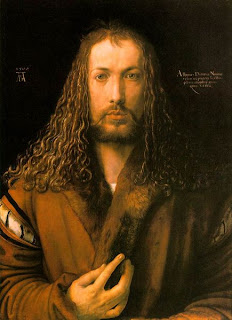 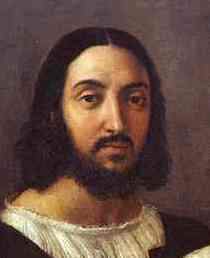 Intrigued by the Holy Face of Manoppello, I went online to do a bit more research. I came up with this article which purports to be serious research, and sure enough, it has lots of footnotes. The author believes the image of Manappello is a sixteenth century painting. He says there are traces of pigment on the cloth, and he uncovers a fascinating correspondence between the artists Albrecht Durer and Raphael in which Durer sends Raphael a self portrait painted on byssus (byssus is the unusual fabric called ‘mussel silk’). The self portrait was done on this transparent cloth and the image was discernible from both sides of the fabric. This would match the correct time period, and we know that Durer did a famous full face self portrait in which he resembles Christ (above left). So, is the image of Manoppello really a self portrait of Durer? It doesn’t look like him, but if it resembles any artist of the time it resembles Raphael (above right) not Durer. Did Raphael learn from Durer how to make a similarly ‘miraculous’ image painted on byssus? Is the image at Manoppello a wonderful self portrait of the artist Raphael? However, Raphael probably would have done a better job. Maybe the image is a sixteenth century painting using the technique known by Raphael and Durer to produce a darn good Veronica ‘relic.’

It all sounds plausible, then you read this article more closely and realize that despite the footnotes the author has made some stunningly uninformed statements. Despite being aware of Paul Badde’s research (he mis spells Badde’s name) about mussel silk, he doesn’t seem aware at all of the strange qualities of mussel silk (byssus) and says that the expert on byssus that Badde found said the fabric was cambric–which is a fine type of cotton cloth. She didn’t. She said it was byssus. Furthermore, if Durer painted on byssus why isn’t this better known amongst art historians? Did the author really discover such a convenient fact? Why isn’t it better documented? If the cloth is byssus, why not take it out of the reliquary and allow for closer and foolproof scientific identification? Why not put the cloth under the microscope to tell us once and for all whether the image is painted?

This shows the fascinating slipperiness of all the research surrounding the shroud and the holy face of Manoppello. As soon as someone gets ‘scientific proof’ another ‘expert’ explains why the proof is not quite what it seems to be. So the scientists in 1987 told us through carbon dating that the shroud was from the fourteenth century. Now they tell us that the carbon dating was probably flawed, and they took samples from a part of the cloth that was infected with later, medieval fabrics. Similarly, if they examine the veil of Manoppello and find traces of paint the believers will say, “That was probably from a medieval touch up of the original miraculous image.”

It all comes down to the intriguing work of providence in our lives. God will give us enough evidence for faith, but not enough evidence to destroy faith. The shroud of Turin and the veil of Manoppello give us tantalizing scraps of evidence–marvelous pointers to the face of God, but this evidence leads us to faith–it does not force faith. At the end of the day we are brought to a certain point in which faith becomes reasonable. Then we step out of the boat and walk on the water.

Then the real fun begins…