Eyewitness Report from the Exorcism House

Eyewitness Report from the Exorcism House 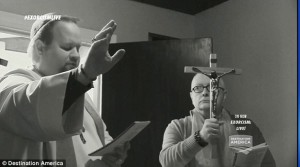 Anyone who saw the “exorcism” TV show last night will probably agree with Deacon Kandra’s report here in which he quotes the review from Variety.

Frankly, the producers seemed to squander an opportunity with their taped packages, which relied heavily on over-the-top dramatic recreations, which looked pretty pallid compared to clips from the movie. Given that most people are familiar with the 1973 film, but not so much with the 1949 case in St. Louis that provided its underpinnings, a more scholarly approach to that material might have actually been interesting.

But no, this “live” stunt was really all about showmanship, and not incidentally promoting the gang at “Ghost Asylum,” which airs on the network. As for whether they approached the task with any skepticism, that was summed up by their poet laureate, Steven “Doogie” McDougal, who spoke of entering “a little bitty room that you know Satan was in.”

I said yesterday in this post that the whole thing was likely to be a load of hokum . I said the exorcism reality show would be all show and no reality and I was right.

One of my readers named Jane happens to live across the street from the “exorcism house” and sent me this report.

We had 5 semi-trucks, 2 rvs, a potty house, 2 satelitte trucks, 5 generators, hair and make-up trailers, ect…in front of my house for 4 days. Where I live you can’t swing a cat without hitting a Catholic and everybody knows that the exorcism on that boy was very very real, but there is absolutely nothing in that house.

I figured as much. I like the fact that this is a Catholic community and the down to earth ordinary Catholics are pretty realistic about this nonsense. Jane continued with her description:

We sat with a mixture of irritation and amusement at the circus that came to our quiet village. All the neighbors chatted and complained and laughed outside at the pre- show chaos, but in the end, when the show started we all went inside, and averted our eyes because you don’t need an old house to call out the devil, just intent.

I reminded my neighbors that the devil doesn’t do business like this, particularly on TV, because it would make believers in GOD–definitely not in the playbook. Nonetheless, the kids and I put the Holy Family, our guardian angel, St. Michael and candles in the window, and asked God to bless all the stupid people. (It seemed most direct way to cover everyone involved) I am pretty sure I heard an Almighty “Oy Vey” in response.

Jane’s response is the right one. On the one hand the devil is real and demon possession is real. We should be alert and watchful, put up our guards and stay away from poison like that. On the other hand, to get all melodramatic and sensationalize this stuff is only to give it the oxygen of publicity.

The “priest” involved wasn’t even Catholic, and it is typical of that kind of Catholic schismatic that he wants to put on a good show. I’ve met these guys before. They’re all cope and mitre and no cattle.

Is there a prayer to bless “stupid people” as Jane puts it?

I guess it would be, “May the Lord bless and keep the stupid people…far away from us.”