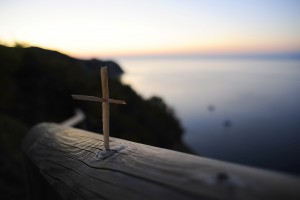 Some time ago I got an anonymous email which said something like, “Get over the idea that there is such a thing as sin. Sin is a stupid idea made up by religious people like you to fleece people of their money and scare them about hell. People like you are evil and wicked and should be stopped.”

It was, of course, ironic that the writer did not believe in sin, but he clearly believed in evil. Furthermore, he was convinced that I was evil.

One of the problems with our society is that we are wallowing in sin, but we have consciences that are very uninformed and ignorant. We have been taught that there really isn’t such a thing as sin. Instead we make “mistakes” or we “do sometimes do things that are not best.” How many times have you heard a priest introduce the general confession at Mass with weasel words like, “Let’s all take a moment now to think of those thing this week that have made ourselves or others unhappy.”? You get the idea.

The problem with preaching about sin is that people think you are trying to give them a guilt trip, scare them into heaven or even worse, scare them into giving you their money. It might seem like this.

But the real reason to learn about sin is very practical. Sin is whatever we do or do not do which hinders us from entering heaven. Heaven is not the reward for being good. Heaven is the result of becoming good. In other words, heaven is the final destination for people who, through a life of repentance, faith and faith-full good works have become perfected by God’s grace. Heaven is their home. It is where they belong.

Yesterday was the 100th anniversary of the Fatima children’s vision of hell. Perhaps it would be sobering to remember how they envisioned it:

“Our Lady showed us a great sea of fire which seemed to be under the earth. Plunged in this fire were demons and souls in human form, like transparent burning embers, all blackened or burnished bronze, floating about in the conflagration, now raised into the air by the flames that issued from within themselves together with great clouds of smoke, now falling back on every side like sparks in a huge fire, without weight or equilibrium, and amid shrieks and groans of pain and despair, which horrified us and made us tremble with fear. The demons could be distinguished by their terrifying and repellent likeness to frightful and unknown animals, all black and transparent.”

That’s why we should be aware of sin because it is missing the mark. As an athlete gets rid of anything which keeps him from winning the prize, so we should get rid of every sin. As a musician works hard to perfect her talent, so we should work hard (by God’s grace) to purify our souls.

When we see sin in this light we should not be feel guilty and ashamed. Instead, like the athlete or the musician, we persevere in order that we might one day with the prize of the high calling heavenward to God in Christ Jesus. (Phil. 3:14)