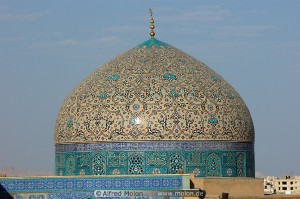 It’s easy in a secular, consumerist society to believe that all religions are really pretty much the same. You pays your money and you makes your choice.

People see the different customs of the different religions, but put them on one side and they see the similarities. Hey, in the dark time of the year Christian have Advent which is all about lighting candles and the light of the world. Jews have Hanukah and light candles. Hindus have Diwali which is all about light. The religions all have holy books and they’re all pretty much the same.

When this is taken to it’s illogical end we end up putting posters on our walls with a winding path up a mountain and a caption, “We’re all climbing the same mountain by different paths.” You know the sort of thing.

The Catholic Church teaches something similar to that, but not quite.

The Church teaches that the non-Christian religions have elements of beauty, truth and goodness within them, but they are incomplete. We are called to affirm the goodness, truth and beauty within those other religions, but we are also called to point out their deficiencies. It is possible to follow a non-Christian religion and actually be misled by Satan and follow a false religion.

The Catholic Church recognizes in other religions that search, among shadows and images, for the God who is unknown yet near since he gives life and breath and all things and wants all men to be saved. Thus, the Church considers all goodness and truth found in these religions as “a preparation for the Gospel and given by him who enlightens all men that they may at length have life.”332

In their religious behavior, however, men also display the limits and errors that disfigure the image of God in them: “Very often, deceived by the Evil One, men have become vain in their reasonings, and have exchanged the truth of God for a lie, and served the creature rather than the Creator. Or else, living and dying in this world without God, they are exposed to ultimate despair.”333 To reunite all his children, scattered and led astray by sin, the Father willed to call the whole of humanity together into his Son’s Church. The Church is the place where humanity must rediscover its unity and salvation”

In other words, following a non-Christian religion is no guarantee of salvation, grace, goodness, light, peace and truth.

That’s why Christians are called not only  to recognize the elements of goodness, truth and beauty in other religions, but we are also called to obey the missionary mandate. Paragraphs 849-856 of the Catechism lay out clearly what that missionary mandate means for Catholics.

To facilitate this missionary mandate with Muslims it is necessary not only to affirm what is good, beautiful and true in the Islamic religion, but also to acknowledge the clear differences between Islam and Christianity. Here’s a list:

1. Christ’s Kingdom was Not of This World Mohammad’s was – Jesus and Mohammad are very different characters. Jesus died as a victim of cruel injustice. Mohammad, in the latter part of his life was a fierce warlord. He and his immediate followers were ruthless warriors intent on political and economic conquest. Of course this doesn’t mean that every follower of Mohammad must be a jihadist, but it gives those extremists who do want to commit acts of terror a powerful role model. Muslims who insist that terrorism is a distortion of Islam have to contend with the example of Mohammad himself.

2. The Bible is Very Different From the Koran – Its easy to think that Islam and Christianity are both religions of the Book. That might be so for Muslims and Protestants (who hold to the doctrine of sola Scriptura) but you can’t throw Catholics in there. The Catholic Church teaches that ours is not a religion of the book, but a religion of a person–Our Lord and Savior Jesus Christ. The Bible is simply the witness to Jesus Christ. The Old Testament points forward to him. The New Testament points back to him. Jesus is God’s revelation to the world…not a book of rules and regulations.

3. Jesus is Very Different from Mohammad – Jesus is the Divine Son of God, the second person of the Holy Trinity incarnate of the Blessed Virgin Mary and made man. Mohammad is a prophet. Jesus died and rose again. You can visit Mohammad’s tomb in Medina. Mohammad taught that he was only a man and should not be worshipped, but some Islamic devotion to Mohammad would seem to contradict his teaching.

4. Jesus Teaches Us to Call God “Father” Mohammad would never do that – At the heart of the Christian faith is the filial relationship between God and his children. We call God “Abba” – “Papa”. For Muslims this is a non starter. They would deny that God can be called Father. He is Master and instead of being God’s child, the Islamic devotee is God’s slave.

5. Christianity teaches that God is Love. Islam teaches that God is Pure Will – For Christians God is love and all his being is determined by this everlasting love. Muslims believe that God is merciful and forgiving and that he provides for his creatures, but he doesn’t have to. God will do what he will do and man must submit. The Christian idea of self giving and suffering love at the heart  of all things is not a key Islamic idea.