Flying with the Cappadocian Fathers

Flying with the Cappadocian Fathers 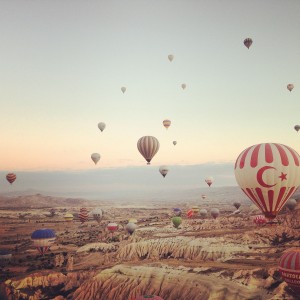 So maybe you thought “Cappadocia” was one of those fancy coffees they make at Starbucks?

It’s a region of Turkey.

My two oldest kids have just spent five months traveling around the world and they visited Cappadocia where the terrain is best seen by hot air balloon.

I asked them how they filled the ballon with hot air. They said it was difficult without me there to stand in the basket preaching….(bad joke)

So when they came home and said they had flown over Cappadocia I was mildly excited because that is the home stomping ground of the Cappadocian Fathers – Gregory of Nazianzen, Gregory of Nyssa and his brother, Basil.

The territory of Cappadocia in Anatolia in modern day Turkey is a fascinating chunk of geography and history. Situated on a high plateau, it is home to the most amazingly dramatic geological features–rocky outcrops, pillars and chimneys of rock and a network of caves. In the Acts of the Apostles it is recorded that there were “people from Cappadocia” at Pentecost and the first epistle of Peter mentions those “scattered through Cappadocia” Recently a whole underground city was discovered built by early Christians to escape persecution. 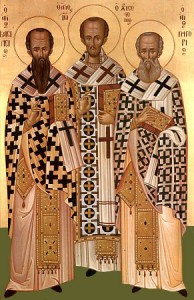 The Cappadocian Fathers were instrumental in developing the church in the fourth century. Basil is the Father of Eastern monasticism. Along with Pachomius he established communities of hermits and monks living an austere live in the desert. He was also known as an outstanding theologian and a lover of the poor and underprivileged who he served with humility and kindness.

Basil’s brother Gregory was the introvert. A quiet and meek theologian, he produced original work on the nature of the Trinity, Christian anthropology and soteriology. He was one of the first Christian theologians to argue that slavery was wrong, and developed an optimistic understanding of God’s grace and salvation extending to all mankind.

Gregory of Nazianzen was also an outstanding theologian, reconciling Greek philosophy with Christian thought. His work along with Nyssa helped to formulate and define the orthodox understanding of the nature of the incarnation and the Holy Trinity.

I’d love to visit Cappadocia one day, but in the meantime I like to visualize this tough and unforgiving countryside as the birthplace of these men who held together such opposing attributes: aristocratic and yet ascetical, highly educated and well connected yet lovers of the poor. Theologians of the incarnation and Holy Trinity, but devoted to the Lord incarnate in the church and in the poor.

This is the thrill of being Catholic–that these theologians working in the harsh climate and land of Cappadocia in the fourth century are alive today and their thought is still vital and influencing theologians and scholars like Hans Urs Von Bathasar and Danielou and John Zizioulas.

The Cappadocian Fathers were instrumental in the triumph of Nicean orthodoxy over the Arian heresy. So who cares? What dose it matter at the beginning of the twenty first century?

Because Arianism is still common today in all sorts of ways: Go here for a post on Arianism today…