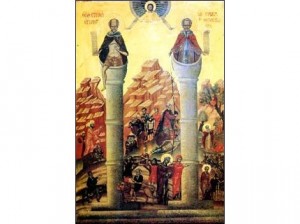 So it is January second. You’re feeling fat and ugly after all the feasting and partying and lazing about.

Now the gym owners rub their hands with glee at all the new memberships that will flood in. They’ll sell the bright eyed enthusiasts a years’ membership and know most of them will pack it in after three weeks.

I’ve got a suggestion. Fugeddabodit. For Get A Bout It. Forget about it.

Here’s why. The resolutions based on emotion (you’re feeling bad and then you’re feeling bad about feeling bad) disappear as soon as you are feeling better again. Lose weight? I haven’t had a heart attack today. Stop smoking? I’m not dying of lung cancer right now. Drink less? I can stop whenever I want. Get more exercise? I feel fine right now.

Here’s what you should do instead: try asceticism.

Asceticism is the ancient Christian practice of physical self discipline. Okay, so the ancient monks used to throw themselves naked into a briar patch to quench the fires of lust. They used to beat themselves with nettles or let themselves get stung by bees. They fasted for forty days and thought nothing of it. St Simeon Stylites lived on top of a pillar in the Syrian desert for 37 years. We’re  talking hair shirts, flagellation, chastity belts and putting a pebble in your shoe. On purpose. 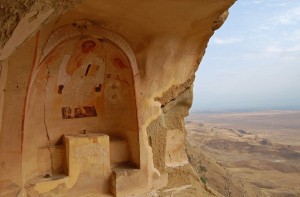 Not really. Asceticism is practiced in lots of sensible ways, and we do it in our modern life all the time, but without a spiritual intent. People diet. They go to the gym. For goodness sake, the endure great pain and expense having cosmetic surgery. They scream with pain having their hair waxed and they sweat it out in the sauna, embarrass themselves running around the neighborhood in tight clothes and do all sort of other physically self denying things and we think nothing of it. We think it’s normal.

Beat yourself up, endure great pain, make huge financial sacrifices, discipline your body, deny yourself in order to look more sexy–why that’s considered perfectly normal. Do everything you can to make yourself look like a Barbie doll and he, that’s okay.

Make any little sacrifice for your spiritual life and people think you’re a religious fanatic.

So here’s what I suggest for the New Year. Give yourself a sensible, regular, planned and ordered structure of physical self discipline in order to strengthen your spiritual life.

Fast on Fridays. That’s it. It’s simple and it’s actually an obligation of all Catholics. We’re supposed to fast on Fridays in honor and remembrance of the Lord’s suffering.

How do you fast? The extreme fast is nil by mouth (except water) from the end of supper on Thursday until Saturday morning breakfast. However, that may take some working into. Start by making a small, but realistic sacrifice. Skip a meal. Don’t eat meat. Make Friday a mini Lent–no sweets, cakes or desserts. Then  when you’ve mastered the first step move on to skipping two meals. Work up to the full fast.

Others fast on bread and water on both Fridays and Wednesdays. There is a fantastic apostolate called Live the Fast. These folks not only provide materials, information and teaching on the discipline of fasting, they also ship out little healthy, natural bread loaves for those who with to fast on bread and water. They bread rolls are tasty and simple. Check out their website.

Fasting on Fridays will help you control your weight. It’s healthy and wholesome because it gives your system a day to rest and clear itself of toxins. When you devote the time you’d spend eating to saying an extra rosary or going to Mass you also take a quantum leap forward spiritually.

There’s another benefit: you will change psychologically as you begin fasting. Eventually other areas of your life where you lacked self discipline will fall into line. It’s kind of like by fasting you gain control of your whole life and submit it to God.

So make this your one resolution. Forget about the gym, the diet and the unrealistic expectations. Just decide to fast on Fridays. Take it slow to start and build up.

It will have amazing benefits in your life….and you can leave the sitting on pillars and rolling in nettle beds to Eastern Orthodox monks living  in Turkey…