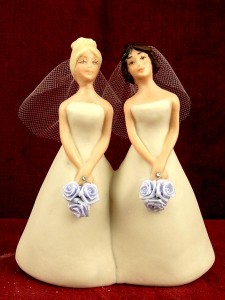 Everybody should see the storm clouds on the horizon.

The re-definition of marriage is gathering pace not only in the USA but around the world.

Same sex marriage is going to happen whether we like it or not.

Those who are in favor of same sex marriage will continue to push for what they perceive as their rights.

Some will push not only to have civil marriages, but will want to have religious ceremonies.

Some religious groups will be good with this. Some will not.

Those religious groups who will be unable to endorse same sex marriage will be under pressure to provide such marriages for same sex couples, and because the religious minister is also an official of the state at that point there is a very real possibility of a clash that will be unsolvable.

Here’s a solution which is easy and should satisfy everyone: get the churches out of the legal marrying business.

It’s simple: everyone who wants to be married goes to the judge or justice of the peace for a civil ceremony. They get their marriage license then they may do as they wish. If they want a religious ceremony of some sort they may have one in whatever way they choose.

This should already be the way we do things in a country where we, from the beginning have prized the separation of church and state. Continue Reading