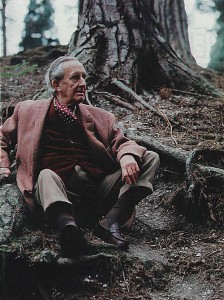 Fr Barron has an excellent article reproduced below which picks up the main teaching theme of Pope Francis’ encyclical.

He traces the philosophical roots and traces the same themes in the work of J.R.R.Tolkien and C.S.Lewis.
I might add that the pope’s fellow Jesuit, Gerard Manley Hopkins also laments the smudge and soil man’s industrial tread has left on the world.
In his poetry–especially The World is Charged with the Grandeur of God  Hopkins calls for a return to sacred reverence for God’s good earth.
Here is Fr Barron’s article:

In 1986, after serving in a variety of capacities in the Jesuit province of Argentina, Jorge Mario Bergoglio commenced doctoral studies in Germany. The focus of his research was the great twentieth century theologian and cultural critic Romano Guardini, who had been a key influence on, among many others, Karl Rahner, Henri de Lubac, and Joseph Ratzinger. As things turned out, Bergoglio never finished his doctoral degree (he probably started too late in life), but his immersion in the writings of Guardini decisively shaped his thinking. Most of the commentary on Pope Francis’s encyclical Laudato Si‘ has focused on the issue of global warming and the Pope’s alignment with this or that political perspective, but this is to miss the forest for one very particular tree. As I read through the document, I saw, on practically every page, the influence of Romano Guardini and his distinctive take on modernity.

To get a handle on Guardini’s worldview, one should start with a series of essays that he wrote in the 1920’s, gathered into book form as Letters from Lake Como. Like many Germans (despite his very Italian name, Guardini was culturally German), he loved to vacation in Italy, and he took particular delight in the lake region around Milan. He was enchanted, of course, by the physical beauty of the area, but what intrigued him above all was the manner in which human beings, through their architecture and craftsmanship, interacted non-invasively and respectfully with nature. When he first came to the region, he noticed, for example, how the homes along Lake Como imitated the lines and rhythms of the landscape and how the boats that plied the lake did so in response to the swelling and falling of the waves. But by the 1920’s, he had begun to notice a change. The homes being built were not only larger, but more “aggressive,” indifferent to the surrounding environment, no longer accommodating themselves to the natural setting. And the motor-driven boats on the lake were no longer moving in rhythm with the waves, but rather cutting through them indifferently.

In these unhappy changes, Guardini noted the emergence of a distinctively modern sensibility. He meant that the attitudes first articulated by Francis Bacon in the sixteenth century and René Descartes in the seventeenth were coming to dominate the mentality of twentieth-century men and women. Consciously departing from Aristotle, who had said that knowledge is a modality of contemplation, Bacon opined that knowledge is power, more precisely power to control the natural environment. This is why he infamously insisted that the scientist’s task is to put nature “on the rack” so that she might give up her secrets. Just a few decades later, Descartes told the intellectuals of Europe to stop fussing over theological matters and philosophical abstractions and to get about the business of “mastering” nature. To be sure, this shift in consciousness gave rise to the modern sciences and their attendant technologies, but it also, Guardini worried, led to a deep alienation between humanity and nature. The typically modern subject became aggressive and self-absorbed, and the natural world simply something for him to manipulate for his own purposes.

If you want to see an English version of Guardini’s perspective, I would recommend a careful reading of C.S. Lewis, J.R.R. Tolkien, and their Inklings colleagues on the relation between capitalist, technocratic humanity and an increasingly aggressed nature. Continue Reading